Civil And Criminal Cases Against Employers That Cheated Workers Recovered More Than $17 Million In Restitution For Almost 14,000 Workers, Plus $2 Million In Penalties 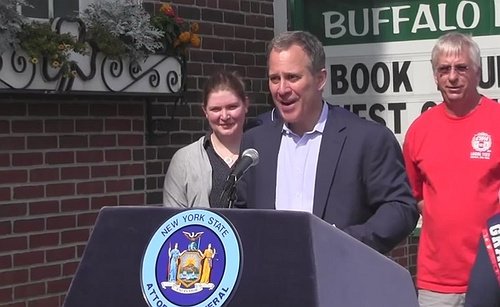 New Yor, NY - September 1, 2014 - On behalf of New York State’s workforce and in recognition of Labor Day, Attorney General Eric T. Schneiderman today issued a Labor Day report containing highlights of his office’s labor enforcement work over the past three years. The Labor Day report, Standing Up For Working New Yorkers, features the results of an ongoing effort to pursue both criminal and civil cases against unscrupulous business owners and bring fairness to workplaces across the State of New York.  Schneiderman announced the report during a press conference with labor leaders before marching in the Buffalo Labor Day Parade.
As the report reveals, since Attorney General Schneiderman took office in January 2011, his Labor Bureau has successfully brought cases against employers that cheated their workers out of wages and otherwise violated state labor laws, returning over $17 million in restitution to almost 14,000 workers and recovering more than $2 million in restitution and penalties for the state.
“Vigorously enforcing our labor laws to protect workers’ rights is an essential component of our commitment to enforcing one set of rules for everyone,” said Attorney General Schneiderman. “Depriving workers of their wages or other lawful benefits hurts families and communities, and creates an unfair advantage for employers that disregard the laws. This report demonstrates my office’s aggressive enforcement to protect workers’ rights; it shows that my office will use every tool at its disposal to do so.”
The Labor Day report contains highlights of cases involving many different industries, affecting a many different types of workers, and resolving a variety of labor law violations --from wage theft to retaliation.
“I want to thank Attorney General Eric Schneiderman for releasing this report in Buffalo at our annual Labor Day parade,” said Richard Lipsitz, President of the Western New York Area Labor Federation. “Time and time again, the Attorney General has demonstrated his commitment to hardworking men and women. He has also sent a message that depriving workers of fair wages and equal employment opportunities will not be tolerated in New York State.”
Liz Smith, the Worker Center Project Organizer with the Western New York Council on Occupational Safety & Health,said, "We commend the great leadership of NY state Attorney General Eric Schneiderman and the work he has done to protect workers from wage theft, retaliation and to ensure that staffing agencies and businesses comply with the law and treat workers fairly and with dignity."
The report describes the Attorney General’s actions:
Attorney General Eric T. Schneiderman believes that in New York, there must be equal justice under law and one set of rules for everyone.  He encourages every worker who feels that his/her rights have been violated to contact the Office of the Attorney General’s Labor Bureau by calling (212) 416-8700 or visiting the Office of the Attorney General's website here.