First Squad detectives report the details of a boating incident involving a fatality which occurred in Freeport on Monday, 09/01/14 at 2:06 P.M. 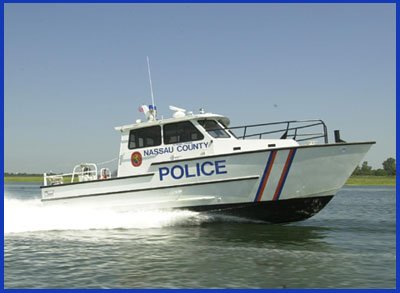 Freeport, NY - September 2nd, 2014 - First Squad detectives report the details of a boating incident involving a fatality which occurred in Freeport on Monday, 09/01/14 at 2:06 P.M.

According to detectives, a 24 foot 2004 Maxum motor boat, carrying a total of nine family members, including two male children, ages 8 and 10, were transiting the waters of Freeport until the vessel experienced mechanical failure in the vicinity of Long Creek, north of the Loop Parkway #2 bridge. At that time, the boat began to flood and the operator called for commercial marine assistance.  The boat occupants then observed the Town of North Hempstead Bay Constables nearby and flagged them down for help. Additionally, passing boats stopped to assist.

As the constables approached, the boat partially submerges rendering the occupants into the water. The Bay Constables removed all of the boat occupants from the water. The children were wearing floatation devices at the time of the incident.

Point Lookout Lido and Merrick Fire Departments transported a female aided, 73, suffering from chest pain and Charles Dimaria, 80, who suffered cardiac arrest, while in the water, to a local hospital. Charles Dimaria was pronounced dead at 3:09 P.M. by a staff physician. The female victim was treated and released.

The boat was towed to a Freeport Marina.  The investigation is ongoing.