If enacted, these rules would make it more difficult for defrauded students to obtain financial relief, Underwood says. 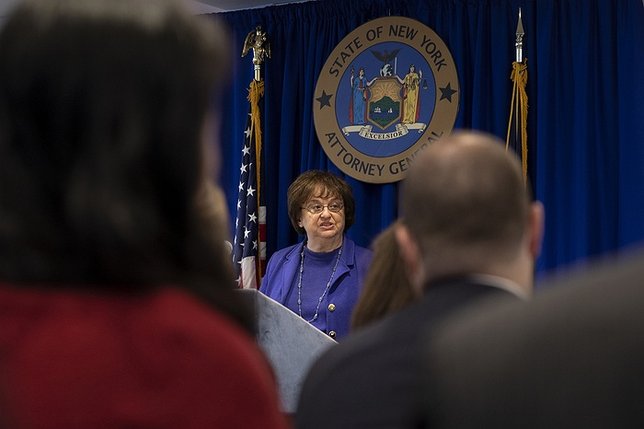 Photo by: Office of AG Underwood

New York, NY - August 31, 2018 - Attorney General Barbara D. Underwood today criticized the U.S. Department of Education (Department) and Secretary of Education Betsy DeVos for putting the interests of predatory for-profit schools ahead of the students she is sworn to protect. In a multistate comment letter, 20 Attorneys General sharply rebuked the Department’s proposed changes to its borrower defense regulations. If enacted, these rules would make it more difficult for defrauded students to obtain financial relief, while giving unscrupulous and predatory schools unwarranted protections.
“The DeVos Department of Education continues to give unscrupulous for-profit schools free rein to exploit hardworking students,” said Attorney General Underwood. “The Borrower Defense Rule was intended to provide critical protections for students who are simply trying to invest in their own education and future – yet the new proposed rule would leave many borrowers high and dry while exacerbating the student loan crisis. This office will do what’s necessary to protect New York’s students.”
Borrower defense is the process by which students who have been defrauded by their schools can have their federal student loans discharged. For example, after the collapse of Corinthian Colleges in 2015, the California Attorney General assisted the Department in preparing factual findings about Corinthian’s misconduct and developing streamlined procedures to provide critical loan relief to tens of thousands of defrauded students around the country.
In the letter to Secretary DeVos, the Attorneys General underscore that the Department’s proposed regulations would make it almost impossible for students to secure debt relief.
The Attorneys General outline a number of issues with the Department’s proposal, including:
The Department’s recent rulemaking comes on the heels of its decision to throw out its borrower defense regulations promulgated in November 2016. The Department has unlawfully delayed implementation of those rules and decided to draft new rules from scratch; a coalition of Attorneys General, including New York, has sued the Department over this unlawful delay.