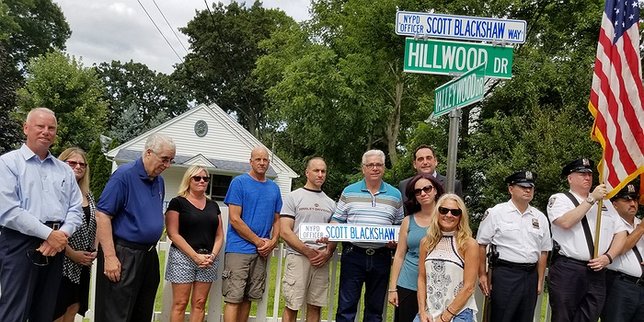 Huntington Station, NY - August 28, 2018 - Supervisor Chad A. Lupinacci was joined by New York State Senator Carl Marcellino, Suffolk County Legislator Tom Donnelly, family, friends and former colleagues of NYPD Officer Scott Blackshaw, including his brother David Blackshaw, and John Feal of the Feal Good Foundation, for a street dedication ceremony taking place in Officer Blackshaw’s honor on Saturday, August 25, at the corner of Valleywood Drive and Hillwood Drive.
"NYPD Officer Scott Blackshaw embodied the American spirit that rises to any challenge, a spirit of selfless sacrifice to help others in need, and a spirit of resolve and bravery committed to defending our way of life," said Supervisor Chad A. Lupinacci. "Scott Blackshaw dedicated his time and his love to his family, neighbors and community and he brought everyone together, as evidenced by the number of people gathered here to celebrate his life today. This is his legacy."
“Although a modest gesture, this street naming will commemorate NYPD Police Officer Scott Blackshaw’s sacrifice, letting it be known that we will never forget the unsung heroes that answered the call that day,” said Senator Carl Marcellino.
“It is with a heavy heart that we fulfill our obligation to honor the heroism, bravery and selfless service of NYPD Officer Scott Blackshaw who like so many 9/11 responders, sacrificed his health and safety for thousands of others,” said Suffolk Legislator Tom Donnelly, a retired FDNY Lieutenant who also partook in 9/11 recovery efforts.  “He sadly paid for his service with critical health issues, but, just as he was in life, Officer Blackshaw will be looked up to every time someone passes this street corner and looks up and sees his name.”
Following the ceremony, which opened with the NYPD Honor Guard’s presentation of the colors, the National Anthem performed by NYPD Officer Caitlin Jennings, and an invocation performed by NYPD Chaplain Father George Anastasiou, Officer Blackshaw’s friends and neighbors hosted a block party celebrating his life with donated food, drinks and supplies from Best Yet in East Northport, East Northport Beverage, and Home Depot in Huntington.
NYPD Officer Scott Blackshaw, shield number #11638, spent six weeks searching for his fallen colleagues and citizens at Ground Zero following the terror attacks on the World Trade Center in 2001. Officer Blackshaw lost his long battle with 9/11-related cancer on Sunday, May 20, 2018.
Valleywood Drive in Huntington Station was officially dedicated “NYPD Officer Scott Blackshaw Way” in a resolution at the June 19 Town Board Meeting.