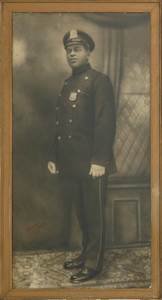 New York, NY - January 30, 2015 - As part of its commitment to telling the story of diversity in New York City and Black History Month, the Museum of the City of New York is displaying a newly-acquired photograph of New York City Patrolman Robert H. Holmes, who in 1917 was the first African-American member of the NYPD to die in the line of duty.

Holmes was shot and killed in a running gun battle with a burglar he’d chased on West 138th Street in Harlem on August 6, 1917, according to the New York Police Department. Holmes “was the hero of the law-abiding element,” the New York Times wrote the next day, and crowds gathered spontaneously in the neighborhood to mourn his death. Holmes had joined the NYPD in 1913 and was one of only four African-American police on the force at the time of his death.

“This is a chance for New Yorkers to learn a sad, but important story about a hero of his time,” said Susan Henshaw Jones, the Ronay Menschel Director at the City Museum. “It is an honor to have his photograph now displayed on our first floor.”

The photograph was donated to the City Museum by Daniel Markewich and will be part of the permanent collection.

About the Museum of the City of New York
Located at 1220 Fifth Avenue at 103rd Street, the Museum of the City of New York celebrates and interprets the city, educating the public about its distinctive character, especially its heritage of diversity, opportunity, and perpetual transformation. Founded in 1923 as a private, nonprofit corporation, the Museum connects the past, present, and future of New York City. It serves the people of New York and visitors from around the world through exhibitions, school and public programs, publications, and collections.