Suffolk Launches Program to “RID” Our Parks of Debris 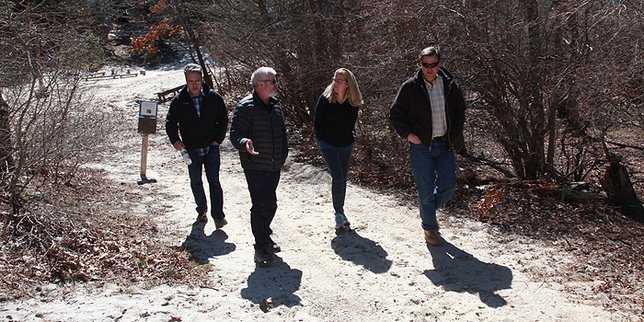 Islandia, NY - August 22, 2017 - Looking to "RID” County Parks of illegal dumping, Suffolk officials today announced the launch of its newly created “Parks Watch” program that will provide greater citizen involvement in the protection of county owned public lands. Modeled after the highly effective national Community Watch program, “Parks Watch” asks parks users and adjacent property owners to be partners in ridding our parks of debris by notifying police and Suffolk County Parks Department personnel.  Tips of suspicious activity can now be called into the program’s dedicated RID hotline at (631) 854-1423 or emailed to RID@suffolkcountyny.gov.
In advance of today’s announcement, the Suffolk County Parks Department has begun posting signs about the program and ways in which visitors can provide tips to authorities. Beyond new signs, the Parks Department will also begin a social media and public awareness campaign to highlight the importance of this new program and of protecting our public lands from illegal and potentially toxic debris.
“We are pleased to be able to add another layer of protection for our parks,” Parks Commissioner Philip Berdolt said. “With the assistance of our park patrons, we will be able to reduce instances of vandalism, dumping and other misuses, and ensure that people can use the parks safely.”
“Parks Watch” was created through Resolution 37-2017, sponsored by Legislator Kara Hahn, Chairwoman of the Legislature’s Parks and Recreation Committee, and follows the discoveries of illegal dumping and vandalism within several Long Island parks including Suffolk’s West Hills County Park.
“Illegal dumping threatens every Suffolk County resident’s quality of life, therefore, it is quite fitting that with the support of parks users, neighbors and community partners we will ‘rid’ our public lands of this degradation,” said Legislator Hahn. “Suffolk’s ‘Parks Watch’ Program not only offers County parks personnel and investigators a new tool to monitor for illegal dumping and vandalism, but also encourages our residents – the men, women and children these lands were acquired for - to be part of the protection of our shared treasures.”
"I am proud to be a cosponsor of the Parks Watch Program, as we need a collaborative effort in Suffolk County to preserve the beauty and integrity of our parks," said Legislator Anker. "This program will give community members an opportunity to activity engage as stewards of our environment to protect our community parks and thousands of acres of open space. I encourage all residents to report activity that they believe is suspicious or illegal, as you never know what may be detrimental to our health, public safety, or overall quality of life."
The new “Parks Watch” program was one of several initiatives recently taken by Suffolk County to protect the County’s vast park holdings from illicit activity. In April, Suffolk increased the financial penalties and, for the first time, allowed for jail time of anyone convicted of illegally dumping hazardous materials or waste on County property through legislation spearheaded by Legislator Hahn. Early this year, Suffolk officials also began installing surveillance cameras in some county parks as, a pilot program, to deter vandalism and assist investigators identify culprits.