Defendants allegedly fraudulently submitted bids under workers’ names to represent themselves as a minority- or woman-owned business. 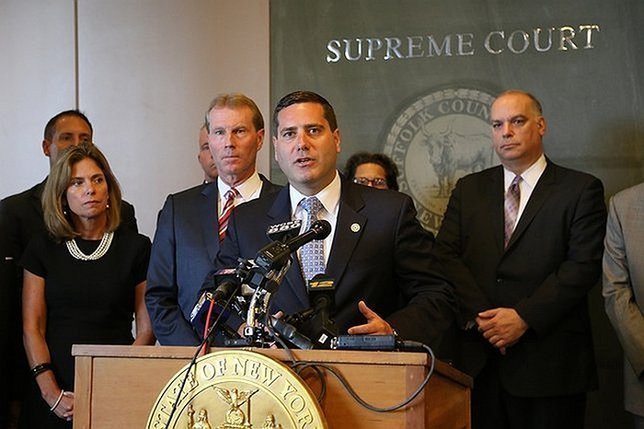 Suffolk County District Attorney Timothy D. Sini has announced the arrest of a contractor for allegedly falsifying information on bids on public works projects in several municipalities in Suffolk County and failing to pay workers’ benefits on projects they were awarded.
Nicholas Analitis, 44, of Massapequa, and his company, Gorilla Contracting Group, LLC, located in West Babylon, are each charged with eight counts of Criminal Possession of a Forged Instrument in the Second Degree, a class D felony, and 10 counts of Offering a False Instrument for Filing in the First Degree, a class E felony; and Failure to Pay Prevailing Wages, a class A misdemeanor.
“These defendants filed false information in an attempt to win contracts over companies that play by the rules,” District Attorney Sini said. “In the contracts they were awarded under false pretenses, which were funded with taxpayer dollars, they did not pay their workers their fair share. We will not tolerate the exploitation of workers in this County, particularly on the taxpayers’ dime.”
Between April 2020 and February 2021, Analitis, acting in concert with Gorilla Contracting Group, LLC, allegedly provided fraudulent Surety and Performance Bonds to various municipalities in Suffolk County as part of bid packages on public works projects that falsely listed other people’s names as the managing partner or owner of Gorilla Contracting.
An investigation by the Suffolk County District Attorney’s Office revealed that the defendants allegedly filed false bids on multiple occasions, including bids for the Town of Babylon’s Carlls River Watershed Project; the Town of Islip’s MacArthur Airport runway reconstruction; the Village of Babylon’s Argyle Falls project; and public works projects for the Port Jefferson School District and the West Islip School District.
On at least one occasion, Analitis allegedly forged the name of an individual as a member or manager of Gorilla Contracting without the individual’s knowledge or consent to represent the company as a Minority- or Woman-Owned Business in the Village of Babylon’s procurement process.
Analitis and Gorilla Contracting were awarded contracts with the Village of Babylon and West Islip School District. On both projects, the defendants allegedly failed to pay supplemental benefits as required by law to Laborers Local 1298 workers. The Suffolk County District Attorney’s Office’s investigation relating to the failure to pay prevailing wages is ongoing.
As part of their municipal bids to the Town of Babylon and Town of Islip, the defendants allegedly claimed that Gorilla Contracting had an Apprenticeship Agreement with Laborers Local 1298, which they did not. Analitis also allegedly forged another individual’s name as the owner, member or partner of Gorilla Contracting or Gorilla Waste and Contracting on those bids without the individual’s knowledge or consent.
Analitis was arraigned on the charges in Suffolk County District Court today and was released on supervised release. He is being represented by Lawrence Carra and is due back in court on Sept. 9.
If convicted of the top count, Analitis faces a maximum sentence of two and one-third to seven years in prison.
This case is being prosecuted by Assistant District Attorney Shiry Gaash, of the Financial Investigations & Money Laundering Bureau.
A criminal charge is merely an accusation and the defendant is presumed innocent until and unless proven guilty.