Governor Cuomo Reminds Motorists to Slow Down in Work Zones

PSA Sends Powerful Message to Motorists in Honor of NYSDOT Worker Who Died in a Work Zone. 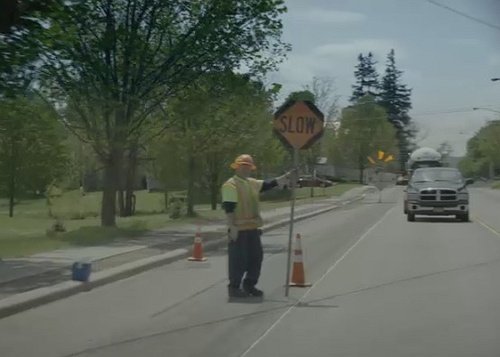 Albany, NY - August 19, 2014 - Governor Andrew M. Cuomo today announced a new video public service announcement to remind motorists to drive safely in highway construction work zones. The PSA begins to air this week and features the wife and family of Gary Farrell, a maintenance worker for the New York State Department of Transportation, who was hit by a vehicle and killed while flagging traffic in a work zone.
“Motorists should always exercise extra caution when traveling in work zones – and today we’re amplifying that message to ensure the safety of New Yorkers both behind the wheel and on the job,” Governor Cuomo said. “Sharing the story of Gary Farrell is an important way to remind New Yorkers to remain alert and careful when driving through work areas. My heart goes out to Gary’s family for their loss, and it is my hope that together we can make the roads safer for all.”
The video PSA can be viewed HERE.
Last year, there were 525 accidents in work zones, resulting in two fatalities and 149 injuries. NYSDOT advises motorists to follow simple rules in order to ensure safety in work zones, including slowing down, obeying signs and being alert and cautious while driving through them. In New York State, fines are doubled for speeding in a work zone. In accordance with the Work Zone Safety Act of 2005, convictions of two or more speeding violations in a work zone could result in the suspension of an individual’s driver’s license.
Gary Farrell, of Holland Patent, Oneida County, was just 48 in November 2009 when he was struck and killed while working on a NYSDOT maintenance job. He left behind his high school sweetheart and wife of 14 years, Michele, and three children, James, Devyn and Alexander. Gary was a family man, volunteer firefighter and outdoorsman who loved to hunt. He had considered taking the day off work to take care of a personal matter – dealing with a deer he had shot while bow hunting the previous day – but did not want to leave his work crew short-handed. So he went to work, promising to be home by noon. Gary was killed at 11 a.m.
Michele’s message to motorists is simple: People need to be aware. Don’t just slow down in work zones, but be aware of your surroundings. The workers are trying to make the roads better for you to travel on. They’re just out there doing their jobs and want to come home to their families. It’s so hard to tell your children that their father was killed. No one should have to go through that.
NYSDOT Commissioner Joan McDonald said, “The people who work for the State Department of Transportation and our contractors literally put their lives on the line every day when they go to work, all in an effort to make the roads and bridges of New York State safer for motorists. Gary Farrell’s story is a tragedy, and it underscores the need for drivers to pay attention in highway construction and maintenance work zones because it is a matter of life and death.”