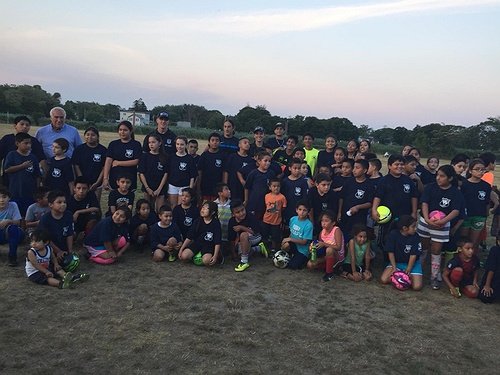 Representatives from Madres Latinas, a mother’s group which meets at the Patchogue Medford Library, and representatives from the Lucero Foundation approached members of the department about starting a program that would strengthen the bond between police and the Patchogue community. Following discussions, it was determined that a PAL Soccer Program would be a great activity for youth in Patchogue. The program began in July and runs through the end of August. More than 140 participants, ages 8 to 14, play soccer on Monday and Wednesday nights from 6 p.m. to 9 p.m. in the Village of Patchogue.

Several coaches and volunteers from the community have been instrumental in the creation, organization and maintenance of this program. Officials from Patchogue Village and the Patchogue Medford School District assisted in providing field locations for the program. PAL paid for the insurance for the program and supplied equipment such as soccer balls, cones and pinnies.

The program will conclude with a pizza party and a ceremony recognizing all of the participants with a medal of participation and a certificate on August 26. In addition, children and parents participating in the program will see a New York Cosmos game at Hofstra University on August 30. The program has been a huge success and enhanced the relationship between the Suffolk County Police Department and the Patchogue community.