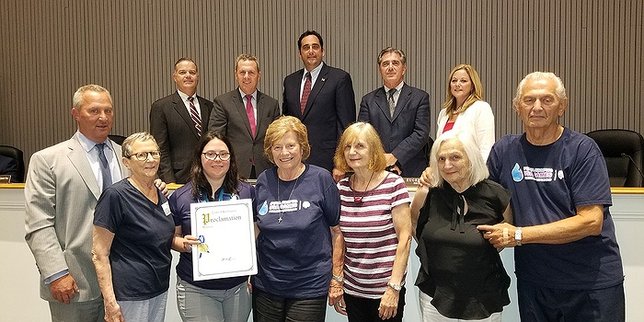 Town Board after presenting proclamation to Danielle Birnbaum and her family. Angel Athenas.

Huntington, NY - August 10, 2018 - At its August 7 meeting, the Huntington Town Board approved open space improvements, replaced the architectural firm working on the James D. Conte Community Center, appointed an alternate member to the Zoning Board of Appeals, appointed various department directors and deputy directors, and accepted two wheelchairs for the Sgt. Paul Tuozzolo Memorial Spray Park, among other Town business.
Supervisor Chad A. Lupinacci and Councilman Ed Smyth co-sponsored a resolution for energy-efficient open space improvements at Manor Field Park in Huntington Station. The measure, seconded by Councilman Eugene Cook, includes the installation of new poles and energy efficient LED light fixtures at Field #32 (the synthetic turf field) at Manor Field Park, as recommended by EOSPA Committee, paid for by $180,000 in EOSPA open space funds and $100,000 from the Neighborhood Parks Fund.
“This improvement will reduce electrical costs, provide better-focused field lighting, increase player safety, and it is in compliance with recommendations in the Town’s Climate Action Plan,” said Supervisor Chad A. Lupinacci.
Councilman Ed Smyth stated: “It is important to preserve open space, especially in Huntington Station, and these improvements do that while keeping costs down and ensuring safety at Manor Field Park.”
In a cost-saving measure, the Town replaced the current architect working on the James D. Conte Community Center project with BBS Architects, Landscape Architects and Engineers, P.C. The current architect had not advanced project beyond conceptual design. On May 22, 2018, they submitted a supplemental fee request of $850,000, raising their total fee to $1.453 million. The features included in the existing renderings had increased the project cost to $14.2 million.
“We do expect to receive a modified plan from BBS after contracts are signed, scaling construction project costs back down within the $9 million range,” said Supervisor Lupinacci, who sponsored the resolution replacing the architect. “Their experience provides knowledge and skills necessary as we move into the important cost management and design phase.”
BBS has completed $3 billion of municipal and school construction project work and have a familiarity with municipal bidding costs and industry trends. Their contract with the Town is not to exceed $711,000 for 4 years with the $9 million project budget.
Councilman Eugene Cook sponsored a resolution appointing real estate attorney Mara S. Manin, Esq., as an alternate member of the Zoning Board of Appeals. Ms. Manin was previously an attorney for the Village of Huntington Bay, representing the Board of Trustees and the Zoning Board of Appeals. Her role included advising the boards on all municipal matters and drafting the boards’ decisions and updates to the Village Code.
“I am proud to sponsor the resolution to add an alternate member to the Town of Huntington Zoning Board of Appeals; town code had been updated ten years ago to allow for alternate members and unfortunately the Board had never acted on the amendment.  It was important to add Mara S. Marin, Esq. a highly qualified individual as an alternate because ZBA meetings had to be cancelled due to lack of a quorum.  I will work with my colleagues to add a second alternate member as allowed by Town of Huntington Code.”, stated Councilman Eugene Cook
The Town Code allows the Town Board to appoint alternate members to the Zoning Board of Appeals to serve as backup members when regular members are unavailable, which has been a recent issue with members away on vacation. There were two open spots for alternate members: Ms. Manin was appointed to one of those spots and the other remains open.
The Town Board appointed directors and deputy directors to various Town departments: Carmen Kasper, Director of Human Services; Jacqueline Harris, Deputy Director of Human Services; Scott R. Spittal, P.E., Deputy Director of Transportation and Traffic Safety; Lisa Putignano, Deputy Director of General Services; Timothy Francis, Deputy Director of General Services; Daniel Martin, Director of Building and Engineering Services; Joseph Cline, P.E., Deputy Director of Building and Engineering Services; David Genaway, Deputy Director of Planning and Environment; and Thelma Neira, Acting Deputy Town Attorney.
The Town accepted a donation of two water-use wheelchairs for the Sgt. Paul Tuozzolo Memorial Spray Park, which opened July 11th. The chairs were donated by Town employee Margo Myles and her husband Sean, who wanted children with special physical needs to be able to enjoy the spray park. The chairs, which have specially-designed wheels, are valued at $2,178.
“We are very appreciative of the Myles family for their generous and thoughtful donation,” said Supervisor Lupinacci, who pointed out, “there are many opportunities for people to help the Town do things that aren’t budgeted for and this is a wonderful example.”
In other action, the Town Board:
Lupinacci presented a proclamation on behalf of the Town Board to Danielle Birnbaum, who won the Gold Medal in the 400-meter freestyle and Bronze Medals for the 200-meter freestyle and the 100-meter butterfly, representing New York State in the 2018 Special Olympics which took place in Seattle, Washington.
"Danielle’s success and perseverance has inspired the Town Board to honor her with this proclamation today," said Supervisor Lupinacci. "We know Danielle will continue to achieve greatness and we cannot wait to see her compete again!"
Supervisor Lupinacci presented Angel Athenas a proclamation on behalf of the Town Board for winning four Gold Medals in Powerlifting event at the 2018 Special Olympics in Seattle, Washington.
"Prior to this year’s USA Games, Angel broke the women’s deadlifting record at the 2018 New York Special Olympics in Albany," said Lupinacci. "The road to the 2019 USA Games will be challenging but we know that Angel will continue to thrive!"