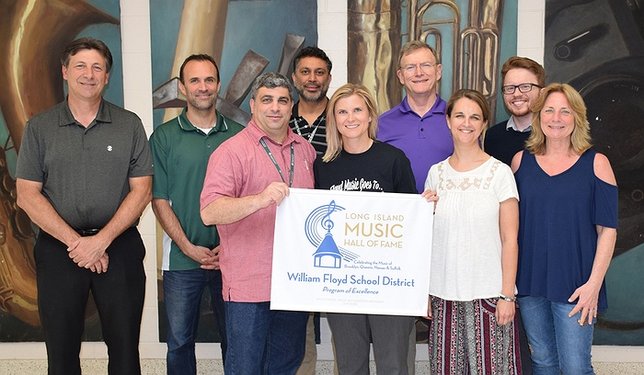 Mastic Beach, NY - May 31, 2018 - The William Floyd School District Music Department has been selected as a recipient of the Long Island Music Hall of Fame (LIMHoF) 2018 Gold Recognition Award for its rich history of excellence in music education, an awards program which is designed to identify Long Island high school music programs that are creating notable music experiences for their students and are incorporating the national and New York State standards for the arts in creative and meaningful ways. William Floyd was recognized along with five other schools and was the only Gold Recognition Award recipient to receive districtwide honors.
The William Floyd School District “music program is part of an elite group who offer students unique, rewarding and rich musical experiences,” according to the official LIMHoF letter announcing the award. “The role of music educators in our society is to be admired as they nurture and develop the talents of young people through their work in schools,” stated Ernie Canadeo, Chairman, LIMHoF, in the letter. “The role of music educators in our society is to be admired as they nurture and develop the talents of young people through their work in schools.”
To be considered for this honor, districts had to submit a thorough application in categories highlighting program details, inclusion of national and state standards for music in curriculum, facility, staffing and community and board support.  Applications were reviewed by a panel of music educators, some of whom have been recognized as the Long Island Music Hall of Fame’s “Educators of Note.”
“The belief that music is an important part of a child’s education has been embedded in the educational philosophy of the William Floyd School District,” said George Ober, Chairperson, Music Department, William Floyd School District. “The culture created for students in school is the expectation for participation in the music program. For many students, William Floyd’s well-rounded music program has been an integral part of their educational life. Many have gone on to music education, music performance and other careers where the enduring lessons provided through participation in the program helped shape their lives. As a teacher/administrator at William Floyd, I am privileged to work for a district with vision and true appreciation for making and keeping music and the arts a key component in a child’s education.”
“The William Floyd Music Department has a long and historic tradition of excellence,” said Kevin M. Coster, Superintendent of Schools. “From state and national recognition, the William Floyd Music Department continues to achieve great things within our schools and community. I’m so proud of all that they have and continue to accomplish each and every day by enriching the lives of our students and community.”
The William Floyd Music Department has received many accolades over the years including the New York State School Music Association (NYSSMA) “Program of Excellence” award; the “Outstanding Music Program” and “Model Music Education” program designations by the National Association for Music Education (NAfME) formerly Music Educators National Conference (MENC); as well as a four-time recipient (2006, 2007, 2017 and 2018) of the “Best Communities for Music Education” designation by the National Association of Music Merchants (NAMM) Foundation.
In addition to William Floyd, the other schools being honored with Gold Recognition Awards are Great Neck North High School, Great Neck South High School, Manhasset High School, Southampton High School and Brentwood High School.
Members of the award-winning music faculty include: Kaitlin Albus, Julia Bellante, Kelly Bergquist, Diana Brown, Amanda Burrage, Michael Cicerelli, Christine Coffill, Dawn Conefry, Joseph Cordaro, Michael Cordaro, Jonathan Dignam, Barbara D’Orio, Ryan Feldscher, Gabriella Forgit, Ralph Guasp, Richard Harris, Therese Heins, Garry Helbock, Juliana Hyatt, Kimberly Hyland, Sharon Kitzis, Jessica Marks, Christopher Miranda, George Ober, Denise Post, Donia Rivera, Garrett Rode, Barbara Sapanaro, Christine Saraceno, Amy Sckipp, Michelle Seifert, Christopher Shaughnessy, Mick Singh, Lauren Svoboda, Debora-Ann Tomko, Jon Trask, Donna Visone-O’Brien, Lynn Zummo and music secretary, Nancy Slane.
About the Long Island Music Hall of Fame
Over the years, Long Island has produced some of the most incredible and accomplished musicians who have influenced generations of music lovers. In 2004, a group of those music lovers, as well as music educators, and industry professionals, banded together to found the Long Island Music Hall of Fame in order to recognize, honor, and preserve Long Island’s longstanding and diverse music heritage. The LIMHoF welcomes the involvement of community volunteers as well as business and corporate leaders. It is their hope that the community will join them in celebrating not only Long Island’s rich music history but also in celebrating the music in all of us.