Governor Cuomo announced that the New York National Guard will host a U.S. Chamber of Commerce Hiring Our Heroes Job Fair at the Farmingdale Armed Forces Reserve Center at 10 a.m. on Thursday, August 13. 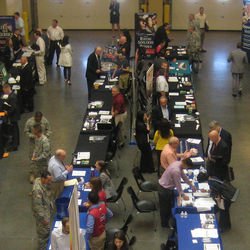 Farmingdale, NY - August 7, 2015 - Governor Cuomo announced that the New York National Guard will host a U.S. Chamber of Commerce Hiring Our Heroes Job Fair at the Farmingdale Armed Forces Reserve Center at 10 a.m. on Thursday, August 13. More than 60 employers offering over 300 jobs to veterans and their families will participate in the event.

“Our dedicated service men and women have put their lives on the line to protect our freedoms and we must do everything we can to support them and their families,” Governor Cuomo said. “By bringing together dozens of employers offering hundreds of jobs, we are setting the stage for veterans to succeed after they return home. I encourage Long Island veterans and their families to visit the Hiring Our Heroes Job Fair and learn more about how the state can help them advance their careers.”

Veterans, members of the National Guard and Reserve, and military spouses are invited to interview with companies offering jobs.

An employment workshop will be held at 8:30 a.m. prior to the event. The workshop, held by the Manufacturing Institute, will focus on resume writing, interview skills, and job search techniques.

Assemblyman Joseph Saladino said, “Our veterans have sacrificed so much to help our nation and our freedom and we are proud to stand with them and help them find good jobs on Long Island. We thank the Governor and all partners involved in making this job fair a reality and wish all of our veterans the best of luck.”

County Executive Edward Mangano said, “Helping our veterans find quality jobs should be our highest priority and this job fair will help do just that. Thanks to Governor Cuomo, all our state and federal partners and the countless employers participating in the job fair for working tirelessly to reemploy our veterans.”​