New Hardware to Enhance Coordination Between Agencies During Emergencies. 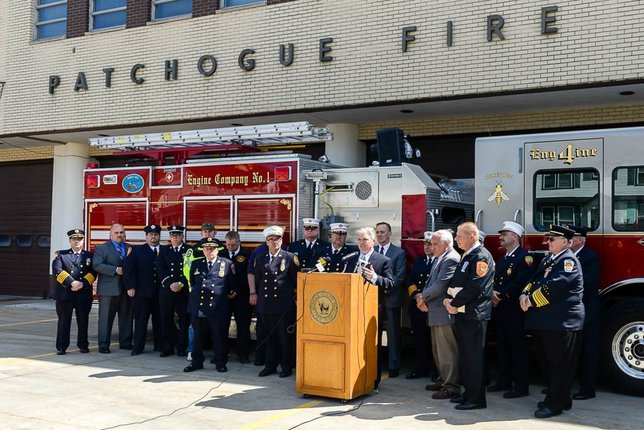 “The new system will allow for interoperability between federal, state and local agencies during times of emergencies,” said Suffolk County Police Commissioner Webber.  “There are over 10,000 radios linked to the current communications system and an upgrade is long overdue.  I would like to thank County Executive Bellone for his support in this mission critical endeavor.”

“We are dealing with other agencies all the time,” said FRES Commissioner Williams. “During Hurricane Sandy, we had to communicate between local emergency response units as well as those who came from out of state. This new system will enable us to communicate seamlessly and residents will be better off for it.”

“When we are talking about safety of Suffolk County residents, that is an investment that government needs to make,” said County Executive Steve Bellone.  “We have a system that our law enforcement and emergency responders tell us that is in need of upgrading and we are committed to making sure they have the tools necessary to protect our communities.”

“First responders are essential to the safety and welfare of the Suffolk County residents,” said Legislator Rob Calarco.  “I support any tools that we can give them to make their job easier and help them respond quicker during emergency events.”

Capital Program 3244 is intended to upgrade the public safety radio system to the P25 standard for communications systems.  Project 25 (P25 or APCO-25) is a suite of standards for digital radio communications for use by federal, state/province and local public safety agencies in North America to enable them to communicate with other agencies and mutual aid response teams in emergencies.  This project will provide Suffolk County with a new communications system infrastructure utilizing the P25 standards.  The project will be implemented in phases, first replacing the aging infrastructure at several communications sites, and next replacing and or upgrading existing radios to new digital technology.

The state-of-the-art system includes features such as portable GPS functionality, digital encryption capabilities for secure communications, added capacity which will allow fire departments the ability to utilize the system for large scale events, such as brush fires and text messaging capabilities.

Officials noted that the first phase of the project would total $11.9 million, which includes major equipment purchases and hardware upgrades.  The second phase will include procurement of new radios and related equipment, projected to be a $10 million investment.  Costs associated with the equipment upgrades are part of the 2015 – 2017 Capital Budget.

Patchogue Fire Chief Joseph Arabia noted, “I am sure I can speak for all those on the front lines and say that this is really going to be a great thing for emergency services out here in Suffolk County.”

For the latest Suffolk County news and information, including video footage of the announcement, visit www.facebook.com/stevebellone.