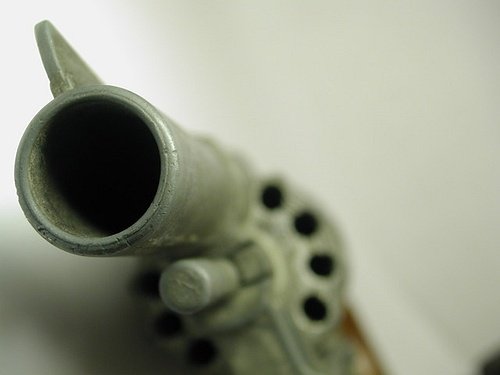 Albany, NY - August 3, 2015 - Attorney General Eric T. Schneiderman today announced agreements with five major retailers, Amazon.com, Kmart, Sears, Walmart and California-based ACTA, for violating a New York State law that prohibits the sale of “imitation weapons,” which are toy guns that look like real guns. The investigation found that, from 2012 through 2014, these retailers – and third-party sellers operating through Amazon.com and Sears.com – sold more than 6,400 prohibited toy guns in New York without the legally-required distinguishing color markings. The deals require the retailers, most of whom sold the toys online, to apply New York City’s strict appearance standards to all statewide sales. New York City law currently requires any toy gun sold in the five boroughs to be entirely brightly colored; state law is more lenient, requiring markings only along the sides and tip of the gun barrel.

“Time and again, these retailers put profits over safety, putting children and police officers at high risk of a tragic encounter,” Attorney General Schneiderman said. “Our investigation found that more than 6,000 dangerously life-like toy guns were sold to New York families in just three years, in violation of state and city laws. Today’s agreements will put an end to future sales, and ensure that families, children, and police will benefit from the full protection these critical public safety laws.”

The fines imposed on Walmart are higher because that company violated a similar 2003 agreement with the Attorney General’s Office, in which it the company agreed to stop selling realistic looking toy guns in New York. While the earlier settlement stemmed from illegal in-store sales of imitation weapons, the current investigation found that those sales had moved to Walmart’s online marketplace.

New York City, New York State and federal laws have long restricted the sale of realistic-looking toy guns because experience has repeatedly demonstrated that these toys endanger both their users and the public. Hundreds of crimes have been committed in New York City with toy guns, and there have been at least 63 shootings in New York State since 1994 as a result of someone holding a toy or imitation weapon. At least eight of those were fatal.

The Attorney General’s investigation, which began in December 2014, showed that four of the retailers, with the exception of Kmart, kept toy guns off the shelves of their brick-and-mortar stores, but that they sold prohibited toy guns to consumers via their online platforms. Attorney General investigators found that prohibited toy guns, priced from less than $10 to as much as several hundred dollars, could be easily purchased online and shipped into New York State. The investigation found that, in addition to selling these illegal toys online, Kmart sold them in stores across the state.

The investigation determined the sales were in violation of state law, and that many toys shipped to New York City violate city law. It revealed that, from 2012 through 2014:

‎"There is a reason why selling life-like toy guns is prohibited in New York. As we all know, when imitation weapons are mistaken for real guns, there can be devastating consequences. Retailers need to understand that if they attempt to curtail these laws and put children at risk just to boost their sales, there will be repercussions. As co-chair of the Council’s Task Force to Combat Gun Violence, I would like to thank Attorney General Schneiderman for his leadership on this issue, and look forward to working with him to further limit situations that put New Yorkers in harm’s way,” said Council Member Jumaane D. Williams (D-Brooklyn), Deputy Leader.

Leah Gunn Barrett, NYAGV Executive Director, said, “We applaud Attorney General Schneiderman for negotiating these ground-breaking agreements that will ensure toy guns sold in NY meet the strongest consumer safety standards. In a society awash with real guns, it’s nearly impossible for law enforcement to quickly distinguish between a real and toy gun in any given situation. Once again, New York is leading the way in gun safety. However, it’s the height of irony that toy guns are subject to federal consumer safety regulations but real guns are not. If we regulated guns for consumer health and safety, we would see a decrease in the 33,000 Americans killed and 84,000 injured by guns each year.”

Jackie Rowe Adams, Founder of Harlem Mothers Save, said “I am truly glad that Attorney General Schneiderman is taking a lead on this issue. Selling prohibited toy guns is unacceptable. We must protect our children by keeping these toy guns off the shelves and out of their hands.”

“I applaud Attorney General Eric Schneiderman for investigating these retailers, who have allowed these prohibited toy guns to be shipped and sold in New York. These realistic-looking imitation toy guns present a clear danger to the public. This agreement will help ensure the safety of families, children, and police officers across the state,” said Assemblywoman Michelle Schimel.

“I’m grateful for Attorney General Schneiderman's leadership in enforcing the state laws that keep New Yorkers—particularly our state’s law enforcement officers—safe from dangerous incidents where it’s unclear whether a gun is a child’s toy or else a dangerous weapon,” said June Rubin, a volunteer with the New York chapter of Moms Demand Action. “Getting realistic-looking toy guns off the street is an important step in the right direction to keep people safe from gun violence.”

"Westchester United, through it's Do Not Stand Idly By Campaign, has enough experience with the gun industry to know that guns are not toys, and the business of selling guns is not something to be toyed around with. What's more, we certainly don't want realistic toy guns in our stores, or in our playgrounds. That's why we're happy to celebrate this new effort to keep illegal toy guns out of the hands of children, and out of New York State," said Fr. Gawain de Leeuw, a leader of Westchester United, Metro IAF, an association of congregations and community organizations that works with police departments and other groups for positive social change.

This case is being handled by Assistant Attorney General Benjamin Bruce, assisted by Senior Consumer Frauds Representative Emily Brightman, both of the Rochester Regional Office. The office is part of the Attorney General’s Division of Regional Affairs, led by Executive Deputy Attorney General Marty Mack.