Sgt. Allison started his career with the Suffolk Sheriff’s Office in 1995 and celebrated his 25th year of service before passing on December 17, 2020. 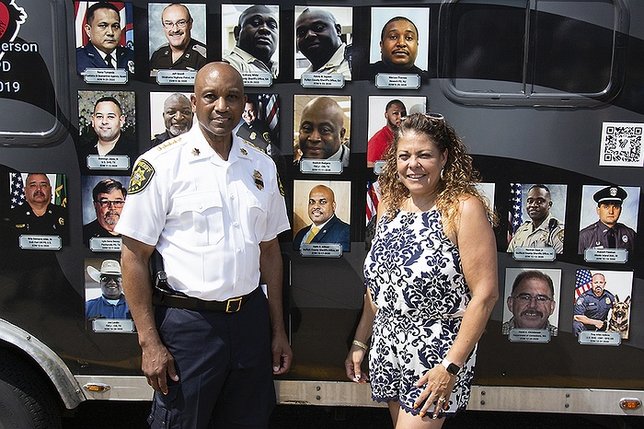 The Beyond the Call of Duty – End of Watch Ride to Remember made a stop at the Suffolk County Correctional Facility in Riverhead Wednesday to pay tribute to Inv. Sgt. Keith Allison and the 337 men and women of law enforcement who paid the ultimate price in their service to their communities in 2020.
The Beyond the Call of Duty – End of Watch Ride to Remember is a group of motorcycle riders from the state of Washington escorting a 41' trailer across the country to honor fallen officers from the prior year. The group is riding for 84 days between May 28th and August 19th and they are traveling 22,300+ miles across the country to honor 338 men and women of law enforcement who passed away in the line of duty in 2020. Not only do they honor the fallen, but they also honor the families.
The caravan of motorcycles and memorial trailers was greeted by Suffolk County Sheriff Dr. Errol D. Toulon, Jr., the family of Inv. Sgt. Keith Allison, elected officials, and uniformed and civilian staff. The caravan was escorted through the five boroughs of the city and across Nassau and Suffolk counties by motorcycles from the NYPD, the State Police, the SCPD, and the Suffolk County Sheriff’s Office.
Sheriff Toulon spoke about Inv. Sgt. Allison and the Ride to Remember. “I think all of us realize the fragility of life. Even if you disagree with someone- whether it is a family member or a friend, life is just too short to hold a grudge. Take the opportunity to reach your hand out and extend it. You never know if you will have that opportunity again.”
“All of these beautiful men and women paid the ultimate sacrifice and are considered heroes. But we should recognize that they were heroes before we realized they were heroes,” said J.C. Shah. “Throughout their lives they did various things that made them heroes to their families, their friends, and their loved ones. To the men and women in uniform here, please remember that you are heroes as well. You wear a beautiful uniform with honor, pride, and respect. From the bottom of hearts at Beyond the Call of Duty, we love all of you.”
Present at the event were County Clerk Judy Pascale, District Attorney Tim Sini, Riverhead Supervisor Yvette Aguiar, Legislator Steve Flotteron, Legislator Sarah Anker, Legislator Jason Richberg, Legislator Sam Gonzalez, and Legislator Bridget Fleming, along with scores of uniformed and civilian Sheriff’s Office Staff.
About Beyond the Call of Duty
Beyond the Call of Duty is an organization that, through its “End of Watch Ride to Remember” event, recognizes police officers – throughout the nation – who died while in the line of duty. Last year, the End of Watch Ride honored 146 fallen officers across the country. This year, they will be honoring the 338 officers who lost their lives in 2020 while serving their community. End of Watch Ride to Remember is on a mission to pay their respects to each of them and assist the families of the fallen however they can. A peaceful community is a prosperous community and we owe a debt of gratitude to those officers who make it possible for us to live in a peaceful and free society. Facebook: https://www.facebook.com/EOWRide.
About Sgt. Inv. Keith Allison
Inv. Sgt. Allison started his career with the Suffolk County Sheriff’s Office in 1995 and celebrated his 25th year of service prior to his passing on December 17, 2020. After a short period of time as a correction officer at the Riverhead Correctional Facility, Inv. Sgt. Allison began working for the Personnel Investigations Bureau, conducting background investigations and interviews for new employees, both uniformed and civilian. He later became the Commanding Officer of the Personnel Investigations Bureau and was promoted to Investigator Sergeant in 2018. Because of his long tenure with the Personnel Investigations Bureau, Inv. Sgt. Allison helped many of the current Sheriff’s Office employees through the hiring process.