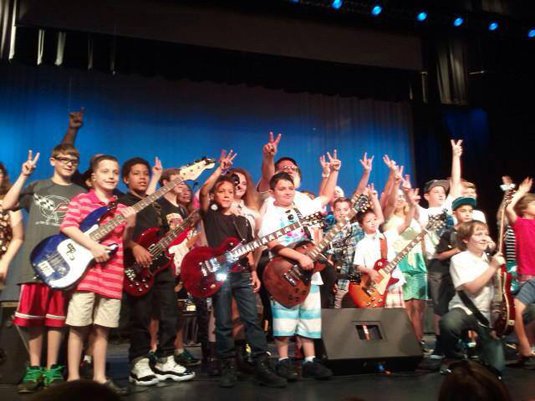 Hauppauge, NY - July 31st, 2013 - on Tuesday September 10th 2013, for the first time ever, a rock and roll school will perform on the field before a major league baseball game. At 6:30pm on September 10th 2013, there will be a 4 song medley on stage behind first base, right on the field at Citi Field, Flushing, New York, before the Mets game against the Washington (DC) Nationals by the great musicians of All Music’s Rock and Roll University (RNRU). Followed by Sydney Schizzano, one of the stars of RNRU singing the National Anthem to start the game. Once the game begins RNRU will take over the Pepsi Porch Concession Area and perform a rock concert. RNRU will Rock Citi Field for the entire game! Its Rock-n-Roll University Day at Citi Field!

Guy Brogna, one of the owners of RNRU states, ”We have some incredible talent to showcase at Citi Field, including one of the students of the school,  ten year old guitar phenomenon, Brandon ‘Taz’ Niederauer, who has already played with Dweezil Zappa and Butch Trucks of the Allman Brothers Band’.

There are limited $10 tickets available for sale directly through All Music’s Rock and Roll University. Call Bill Mignoli, Music Director at 631-656-5901.

After the limited numbers of $10 tickets are gone, you can buy tickets directly from the Mets; All Music’s Rock and Roll University’s Theme Night Page on the Mets website.

ABOUT ALL MUSIC
All Music’s Rock and Roll University is a performance based rock and roll school where the students take private music lessons each week and then attend rehearsals which all lead up to live rock concerts in theaters around Long Island, New York. They have hosted their Big Concert Series at venues like Theatre Three in Port Jefferson and The Boulton Center in Bayshore. After Citi Field their next Big Concert V will be at the historic Landmark Theatre in Port Washington on January 26th 2014. Enrollment is open now for September 2013-January 2014 Show semester.