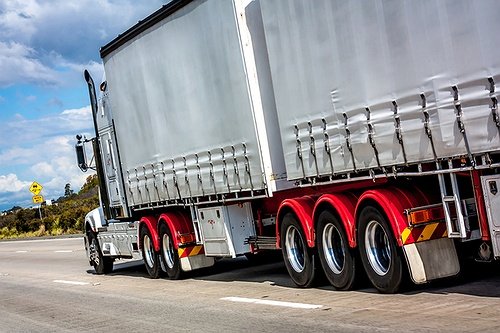 Albany, NY - July 27, 2015 - U.S. Senator Charles Schumer today launched a major push to block a provision in the Senate Transportation, Housing and Urban Development (THUD) Appropriations bill that would permit twin 33-foot trucks on the Long Island Expressway and across other major New York State roadways. Schumer revealed the mammoth size of the trucks being proposed and say they are significantly longer than existing limits and pose serious dangers to other drivers and passengers, as well as to truck drivers and infrastructure. Schumer said their size already preempts New York State law; roughly 80 fatal accidents have involved large trucks across Long Island, a number the Senator says would only rise if these new trucks were allowed on the road.

“It’s time to pull the emergency brake on this dangerous provision allowing trucks the size of an 8-story building on our roads, like our Long Island Expressway. The fact of the matter is, these longer, double-hitched tractor-trailers are a tremendous road safety risk to people and infrastructure alike: they take longer to stop, they have wider turning radiuses, and they place a greater strain on our roads and bridges which are already in need of repair,” said Senator Schumer. “The marginal increase in shipping efficiency does not outweigh the tremendous safety risks of these larger trucks on our roadways, and I will be doing everything in my power to fight this provision from ever becoming law.”

“These oversized, extra-long trucks are equivalent to the size of an 8-story office building on wheels.  Studies show that double trailer trucks have a higher fatal crash rate than single trailer trucks, take motorists longer to pass, and are more difficult to maneuver. Senator Schumer is standing up for the safety of families by opposing backdoor maneuvers in Congress to enact this assault on road safety. Advocates is proud to stand with Sen. Schumer and say ‘No’ to bigger trucks, bigger safety problems and bigger damage to our roads and bridges,” said Jackie Gillan, President of Advocates for Highway and Auto Safety.

“Safety on our Nation’s roadways is a top priority and efforts to allow new longer, more dangerous trucks should be rejected. We applaud Senator Schumer for opposing the provision to allow twin 33-foot trailers, which threatens our members and the motoring public. We will continue working with him to prevent this alarming proposal from becoming law,” said Sergeant Andrew Matthews, Chairman of the National Troopers Coalition, which represents over 40,000 State Troopers in 38 states, including New York.

“The Trucking Alliance opposes efforts to force states to allow double 33’ trailers on U.S. highways. These longer trucks would have negative impact on highway safety, accelerate wear and tear on the nation’s highway system, and make it very difficult for small and medium sized trucking companies, which are the heart of our industry, to compete,” said Lane Kidd, Managing Director of the Trucking Alliance, a group that represents some of the Country’s leading trucking companies.

Schumer said a provision included in the Senate THUD Appropriations bill could pose a serious risk to drivers across New York and nationwide by allowing one truck with two 33-foot tractor trailers to travel on New York State roadways on the National Highway System. The current limit on the National Highway System is double 28-foot trailers, meaning this truck would be 10 feet longer than what is allowed on major roadways. However, these twin 33-foot trucks would also likely replace the single 54-foot trailers, in which case these trucks would actually be 17 feet longer. Schumer explained that this significant increase and the sheer length of these trailers make them a serious safety hazard.

According to the Advocates for Highway and Auto Safety, truck crash fatalities have gone up by 17% and injuries by 28% nationwide over the last four years. Because the number of accidents involving large trucks is already high, Schumer said even larger trucks could make New York State roadways even less safe if this provision is passed.

In fact, according to the National Highway Traffic Safety Administration (NHTSA), across all of New York State, there were a total of 620 fatal crashes involving large trucks from 2009-2014, including 78 on Long Island. In addition, between 2013 and 2014, there were a total of 8,130 non-fatal crashes involving large trucks in New York State, including 1,194 on Long Island alone.

Studies have found that multi-trailer trucks have a significantly higher fatal crash rate than single-trailer trucks. In particular, these 84-foot trucks have large blind spots that put other motorists in danger if the truck driver does not see them. In addition, the dual-trailer length poses an increased risk at intersections, because these trucks require a much wider turning radius – 6 feet longer. These “twin 33s” require a much larger stopping distance as well, approximately 20 feet, 10% longer than the double 28-foot trailers. Finally, the extended length also makes merging and passing very difficult for both the driver and other motorists on the road.

In addition to these major safety concerns, Schumer explained that, despite the fact that New York has a ban on these large trucks traveling on most roadways, the Senate THUD bill’s provision is written in a way that would supersede New York State law. In fact, this provision would preempt the existing law in 39 states which have set a limit on maximum truck length. Currently, larger trucks can only drive on the New York State Thruway. The new provision would force New York to allow larger, 84-foot trailers on all roads within the National Highway System, including the Long Island Expressway.  A detailed map that depicts the National Highway System routes these tractor trailers would be able to traverse can be located by clicking here.

Finally, these large trucks would likely place a greater strain on existing infrastructure unsuited to withstand heavier trucks on roadways. In fact, the United States Department of Transportation (USDOT) has indicated there are many bridges and roadways that would be unable to handle such heavy weights, even on major highways. The USDOT estimates that this amendment would cause between 1.8% and 2.7% increase in pavement maintenance costs and more than 2,500 bridges would require strengthening or replacement as a result of this amendment, potentially costing more than $1 billion.

Therefore, Schumer said he will fight to strip this amendment from the THUD bill when it reaches the Senate floor. Schumer argued that a failure to remove this provision would put drivers in harm’s way, create a strain on New York State roads and potentially cause more serious accidents. Schumer said the marginal increase in shipping efficiency does not outweigh the tremendous safety risks of these larger trucks, and he will be urging his colleagues from both sides of the aisle to join together to oppose it.