The Long Island veterans will reflect and share WWII memories and experiences with all participants. 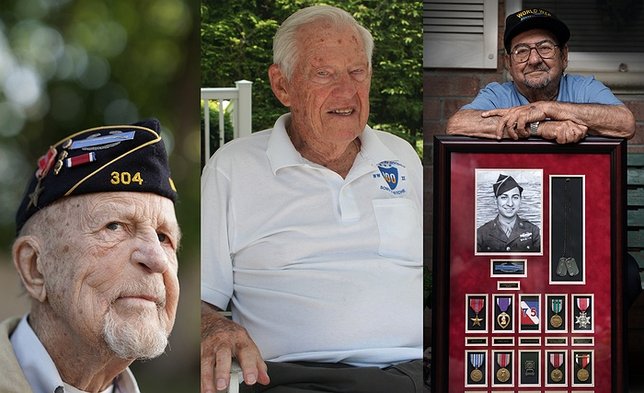 Three World War II veterans to Attend D-Day Living History Flight at Farmingdale's American Airpower Museum July 31 will attend the July 31st C-47 D-Day Living History Flight Experience at the American Airpower Museum in Farmingdale, NY on July 31, 2021.
They’ll join the Airborne living historians in the "corral" and immerse themselves within the sequence of events, interacting with guests/passengers during intake and orientation, in the briefing room as our “paratroopers” march out to the C-47, plus for photo-ops throughout the day.
Airborne equipment and gear will be set up inside the corral for the veterans to reflect on with our guests/passengers. July 31st is an interactive event, allowing veterans to reflect and share WWII memories and experiences with all participants. Our Long Island members of the “Greatest Generation” are:
Gene Leavy
Born November 26, 1925 (95 years old) in Brooklyn, raised in Queens and resides in East Northport.  He enlisted in September of 1943 into the U.S. Army at age 18.  Leavy was trained to be a specialist for the Infantry and the invasion of Europe.  He served in Company I of the 100th Infantry Division of the 398th Regiment, which entered Europe in September of 1944 and defended the Village of Bitche in the Battle of the Bulge.  Sergeant Leavy lost his best friend.  Another buddy was killed by mortar fire.  After WWII ended, Gene served in the American Military Government of Germany where he interviewed prisoners for intelligence purposes.
Joseph Salvatore Randazzo
Born June 6, 1926 (95 years old) in Brooklyn and resides in West Babylon.  Randazzo served in Company G of the 75th Infantry Division of the 291st Regiment.  He enlisted in the U.S. Army’s 75th Infantry Division on his 18th birthday, June 6, 1944, which was also D-Day.  He received the Bronze Star for serving in three combat zones: Rhineland, Central Europe and The Battle of the Bulge (where 48 members of his 75th Infantry Division were killed in action).  On April 7, 1945, Joseph was shot through the leg for which he received the Purple Heart.  His rank was PFC.
Dr. Richard Heinl
Born October 24, 1924 (96 years old), Dr. Heinl was a Pre-Med college student when he was drafted in 1943.  He served in the U.S. Army 94th Infantry  Division of the 376th Regiment.  His Division endured 209 days in combat; 195 of those days were consecutive!  The 94th was part of General George Patton’s Third Army.  He received a Combat Infantry Badge and was awarded two Bronze Stars for valor in combat.  After the war, Richard became an Orthodontist, raised three children, has six grandchildren and resides in Syosset.