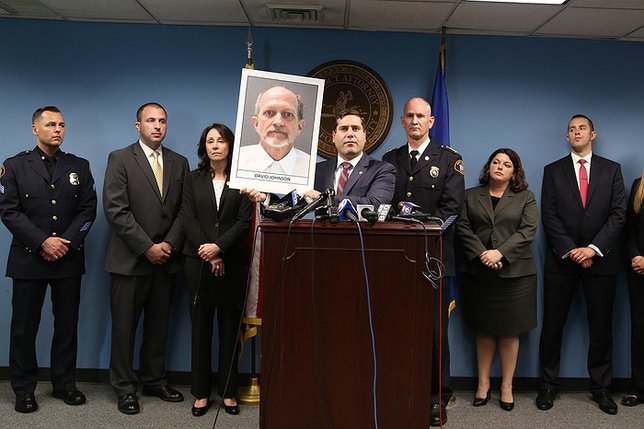 Hauppauge, NY - June 4, 2018 - Suffolk County District Attorney Timothy D. Sini was joined by FBI Long Island Resident Agency Supervisory Special Agent Michael Lewis, Suffolk County Police Commissioner Geraldine Hart and Amityville Village Police Chief Glenn Slack today to announce the unsealing of a 200-count indictment against a man following an investigation that resulted in the seizure of the largest cache of child pornography in Suffolk County history.
“The District Attorney’s Office and our partners in law enforcement have no tolerance for anyone who commits sex crimes against children,” District Attorney Sini said. “Make no mistake about it: The possession and viewing of child pornography is a sex crime against children.”
David Johnson, 58, of Amityville, was arraigned on the indictment today in Suffolk County Court in Riverhead. He is charged with 200 counts of Possessing a Sexual Performance by a Child, which are E felonies. Suffolk County Supreme Court Justice Barbara Kahn set bail at $75,000 cash or $150,000 bond.
On April 25, the Amityville Village Police Department received an MP3 player belonging to Johnson and performed an analysis of the device, which determined that the memory card in the device contained child pornography.
Amityville Police contacted detectives from the Suffolk County Police Department’s Computer Crimes Unit assigned to the FBI Long Island Crimes Against Children Task Force for further investigation.
“This was excellent police work by the Amityville Village Police Department, recognizing the severity of the situation and what they were dealing with at the outset, taking steps to conduct a preliminary analysis to ascertain exactly what they were dealing with, and then collaborating with the Suffolk County Police Department’s Computer Crimes Unit and the FBI,” District Attorney Sini said. 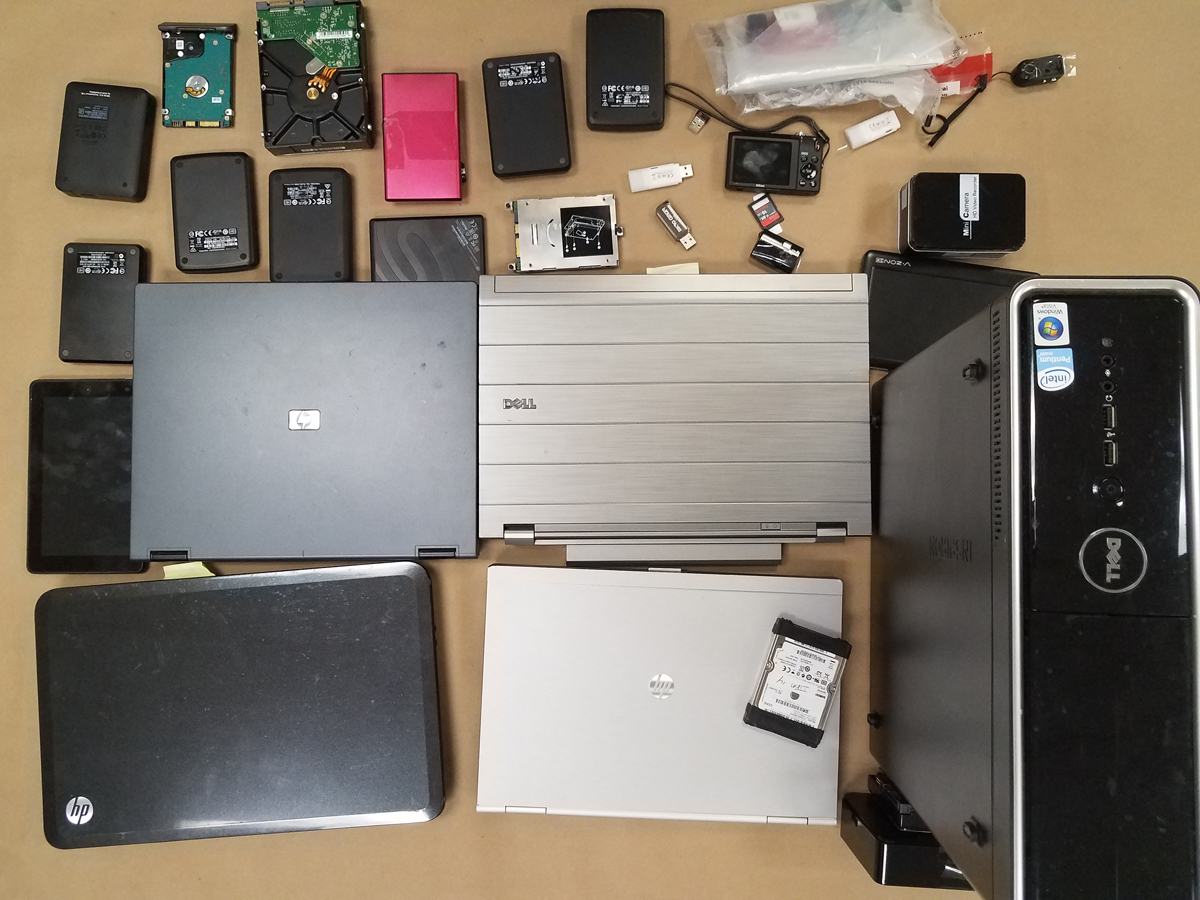 Multiple electronic devices seized from David Johnson. Photo Credit: SCPD
The detectives arrested Johnson on May 14 and charged him with one count of Possessing a Sexual Performance by a Child.
“Of course the detectives and agents did not stop there; they continued to investigate this case thoroughly,” District Attorney Sini said. “One disturbing fact that was motivating their hard work is that this individual lived in close proximity to an elementary school in Amityville Village.”
Pursuant to a subsequent search warrant obtained by the Suffolk County District Attorney’s Office, the detectives searched 23 additional electronics from Johnson’s residence, including laptops, hard drives, memory cards and USB storage devices.
A forensic examination of the electronic devices recovered revealed that Johnson possessed approximately 6,661,242 images and videos of pornography and erotica that included children as young as infants. The analysis of those devices is ongoing.
“This individual not only collected child pornography, but had the disturbing practice of organizing this child pornography by age, race, and by particular characteristics, like whether or not the child victims were wearing glasses,” District Attorney Sini said.
“These images included rape,” District Attorney Sini said. “This is very important to emphasize: The crime of possessing child pornography directly fuels the rape of children.”
If convicted, Johnson faces a maximum indeterminate sentence of 10 to 20 years in prison. He would also be required to register as a sex offender.
“No child should ever suffer the pain, humiliation and damage at the hands of child pornographers, and those who view their vile images. This case is a great example of how the FBI New York and our law enforcement partnerships work, and how essential they are when protecting children from these criminals.  We will continue to work tirelessly every day to stop these predators from abusing and debasing the most vulnerable and innocent part of our society,” said William F. Sweeney, Assistant Director-in-Charge of the FBI in New York.
“This case is a prime example of the success that results from effective partnerships between all law enforcement agencies and as a result, we are ensuring that a dangerous predator like Mr. Johnson will no longer be a threat to our children,” Police Commissioner Hart said. “Protecting our residents, most notably our children, is the highest priority of this police department. We are committed to using every tool in our arsenal to combat these heinous crimes.”
“Thanks to the hard work of Amityville Village Police Sgt. Jeffrey Sears collaborating with the FBI Crimes Against Children Task Force, Suffolk County Police Department and Suffolk County District Attorney’s Office, this dangerous predator was taken into custody. The Amityville Village Police Department is committed to working with our law enforcement partners to keep our community safe,” said Amityville Village Police Chief Slack.
Johnson is due back in court on June 18.
This case is being prosecuted by Assistant District Attorney Christina Pinnola, of the Child Abuse and Domestic Violence Bureau.
A criminal charge is an accusation. A defendant is presumed innocent until and unless proven guilty.