The television series featuring Daredevil, Luke Cage, Iron Fist, and Jessica Jones will be shot during the summer. 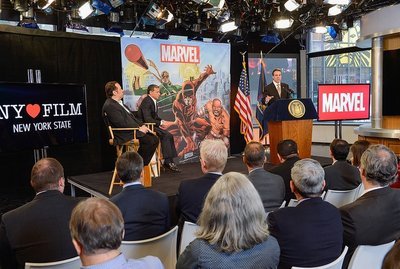 Governor Andrew Cuomo announced Monday that the Walt Disney Company, Marvel, and Netflix are bringing a landmark live-action television series to New York State. The Netflix exclusive show is being described as Marvel’s “flawed heroes of Hell’s Kitchen.” It joins House of Cards and Orange is the New Black as a show which can only be seen on the popular internet streaming service.

There will be a total of 60 one-hour episodes featuring Daredevil, Jessica Jones, Luke Cage, and Iron Fist. Filming will begin in summer 2014 and it is said to be the largest film or television production project commitment coming to New York. It will create three thousand jobs and 400 full time ones.

“New York is where the entertainment industry started, and this unprecedented commitment from Disney and Marvel is further evidence that we’re bringing it back bigger and better than ever before,” said Governor Cuomo. “And when the entertainment industry thrives, it fuels dozens of other industries and businesses. The competition for these projects is fierce and Disney could have chosen to film these shows anywhere, but they knew that shooting in New York means getting to work with the best in world.”

The deal to bring the characters to Netflix was inked in November. Marvel fans will finally be able to see it beginning in 2015. The story will center on Daredevil and his fight with Jessica Jones, Iron Fist, and Luke Cage against Hell’s Kitchen villains such as Kingpin and Bullseye. There will also be a miniseries where the four team up and call themselves the Defenders.

"The Defenders are classic New York characters; smart, resourceful and tough enough to always stand up for what's right," said Ted Sarandos, Netflix Chief Content Officer. "We're delighted they're coming to life on their home turf thanks to Governor Cuomo and his team."

In 2011 Governor Cuomo wanted New York to be a film and television attraction and it seems he has followed through on this. Last year scenes of the Amazing Spider-Man 2 were shot here on Long Island. The summer blockbuster joined 124 were films, 33 television programs, and 26 pilots shot in New York State.