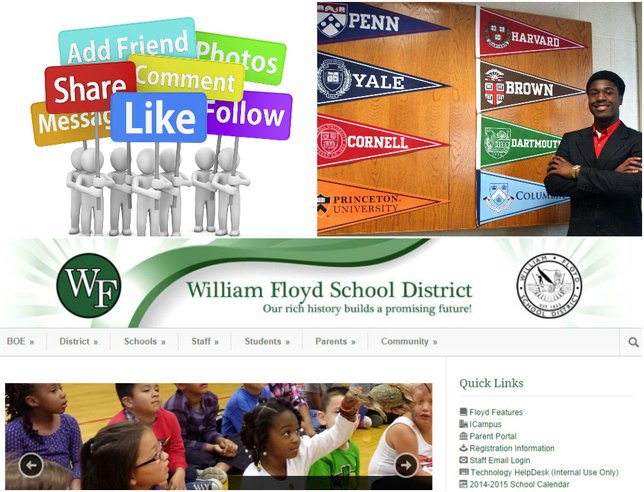 Mastic Beach, NY - September 29, 2014 - The William Floyd School District has been named the recipient of three New York School Public Relations Association (NYSPRA) awards in the organization’s 35th annual Communications Contest. The district received two Excellence awards, with one each in the “Website” and “Photograph” categories; and an Honor award for “Social Media.” The Excellence designation is the equivalent of a first-place award; and the Honor designation is second place.

For the two Excellence awards, William Floyd recently unveiled a new and improved, user-friendly, interactive website; it also received recognition for the viral photograph of Kwasi Enin, the student who garnered global attention last spring for his acceptance into all eight Ivy League schools. The Honor award goes to the district for its use of social media which is used to communicate with residents through five accounts (Facebook, Twitter, Instagram, flickr and YouTube). Congratulations to James Montalto (public relations); Vincent Vaccarello (webmaster); and Diana White (photographer) for being selected for these honors.

“These awards are a testament to the hard work and dedication of our professional staff who handle important behind-the-scenes tasks every day,” said Dr. Paul Casciano, Superintendent of Schools, William Floyd School District. “Congratulations on a job well done.”

Each year, NYSPRA sponsors annual communications awards to recognize and celebrate outstanding achievement in educational communications. The awards contest continues to be one of the largest in the nation and provides both members and non-members with a time to shine and an opportunity to showcase exemplary communication practices. Statewide awards provide recognition for outstanding work; they also build a greater appreciation for the skills of school public relations professionals and promote a better understanding of the broad range of services rendered by education-related communications professionals.

About NYSPRA
NYSPRA is a state chapter of the National School Public Relations Association, nationally recognized for its efforts on behalf of school public relations professionals. With members representing school districts, BOCES and independent public relations agencies throughout New York, NYSPRA is dedicated to the development and dissemination of educational communications that engage parents, staff, community residents, partners in education and other stakeholders.