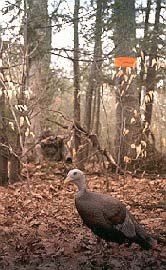 DEC received approximately 120 comments on the regulatory proposal. Almost all of the comments received expressed concern over the decline in wild turkey populations over the past 15 years, and many were supportive of DEC's efforts to modify the fall hunting season to accommodate changing turkey populations and environmental conditions.

The new regulations are part of a multi-year study to understand and respond to long-term declines in turkey populations and to ensure that harvest opportunities are sustainable. The new fall hunting season structure is based on the results of research conducted by DEC and its partners on ecological and social factors that influence turkey populations and turkey management. This included:

Based on those studies, DEC concluded that the best way to enhance turkey populations while maintaining some fall hunting opportunity was to offer a two-week season in all areas of the state, with a seasonal limit of one bird of either sex. Season dates are staggered among three broad regions, which will provide more avid hunters the chance to hunt turkeys for more than just two weeks. This represents a reduced season length in most of the state and a modest increase in season length for Long Island.

The new fall hunting season changes will be evaluated as part of a four-year research program. DEC staff continues to band and track hens in 2015 and 2016 to help evaluate the effects of fall season changes on hen harvest and survival. This information will be used along with information on turkey abundance, productivity, and hunter activity and harvest data collected annually to determine future fall harvest opportunities that are sustainable under current environmental conditions and trends in turkey populations.

The Notice of Adoption for this regulation is published in issue 29 of the New York State Register, dated July 22, 2015. For more information about the new fall turkey hunting regulations, visit the DEC website.