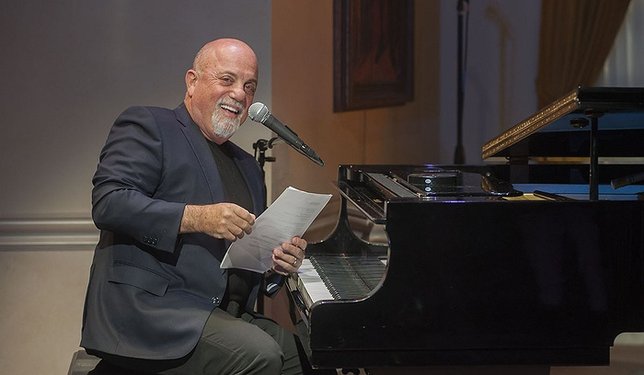 Albany, NY - July 18, 2018 - Governor Andrew M. Cuomo today proclaimed July 18 Billy Joel Day in New York State at the celebration of Billy Joel's 100th lifetime performance at Madison Square Garden. As part of the celebration, Billy Joel's piano will be displayed at Madison Square Garden. The text of the proclamation is available below.
"Billy Joel is not only one of the greatest entertainers of our time, but also a leading advocate for protecting the environment, honoring first responders and improving the lives of New Yorkers," Governor Cuomo said. "I am proud to proclaim Billy Joel Day to congratulate Billy on this milestone, and I look forward to seeing him perform for many years to come."
The text of the proclamation is available here and below.
Whereas, the Empire State is proud to join in celebrating historic achievements in the lives of distinguished New Yorkers who have helped shape our cultural history and have made important, lasting contributions to the lives of our residents; and
Whereas, one of the most iconic and influential figures in American music history, Billy Joel has had an immeasurable impact on the entertainment industry as a singer-songwriter and performer during an extraordinary, accomplished career spanning nearly half a century; and
Whereas, winner of six Grammy Awards and a member of the Rock and Roll Hall of Fame, Billy has produced 33 Top 40 hits in the United States and sold more than 150 million records worldwide, making him one of the most beloved, respected, and best-selling artists of all time and an indelible influence on generations of performers and audience members across the world; and
Whereas, Billy's achievements and influence have continued throughout a long, successful touring career highlighted by decades of sold-out shows across the globe and countless milestones along the way; and
Whereas, since his first performance at Madison Square Garden on December 14, 1978, Billy has established an unmatched record of achievements at The World's Most Famous Arena, including records for most consecutive performances and most lifetime performances; and
Whereas, as Billy marks his 54th consecutive performance and 100th lifetime performance at Madison Square Garden, all New Yorkers are proud to join in recognizing Billy's historic accomplishments and the indelible impact he has had on not only music but our state and nation's cultural landscape;
Now, Therefore, I, Andrew M. Cuomo, Governor of the State of New York, do hereby proclaim July 18, 2018, as
BILLY JOEL DAY
in honor of his extraordinary history of leadership and contributions to the music industry and New York State.