Roads and Public Transportation Throughout Hudson Valley, New York City and Long Island Could be Closed as a Result of Historic Blizzard Conditions with Significant Snow Accumulation. 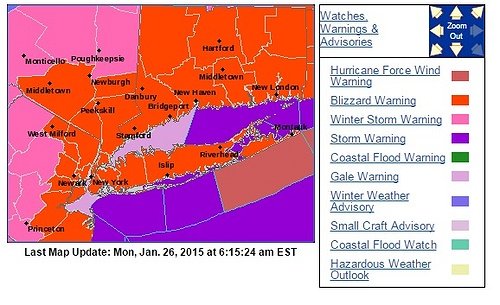 Long Island & the Surrounding Area has a Blizzard Warning in effect, with the potential for hurricane force winds on the South Fork.

Long Island, NY - January 26th, 2015 - Governor Andrew M. Cuomo today urged commuters to consider staying at home on Monday as a massive Nor'Easter snowstorm approaches New York State.
The major winter storm is expected to hit the Long Island, New York City and Mid-Hudson regions beginning Monday and intensify ahead of the evening commute. At its height, the storm could reach as much as 4 inches of snow an hour and zero visibility conditions. As a result, roads including the Thruway, I-84 and the Long Island Expressway, and public transit networks including the LIRR, PATH, Metro North Railroad, and MTA Subways and Buses may be closed ahead of the evening commute. The Governor is urging commuters to work from home Monday if possible, or otherwise plan to leave work early Monday midday.
Travelers using trains, airports or buses to travel in the region should check with carriers before heading to the station or airport. Operators of tandem trucks and commercial vehicles are urged to prepare in advance for the possible closure of major roadways, including I-84, I-87 and the LIE.
"The incoming winter storm is forecasted to hit the Hudson Valley, New York City and Long Island beginning first thing tomorrow, with the heaviest snow starting in the afternoon and reaching a rate of 1-4 inches an hour. As a result, commuters should consider working from home on Monday if possible to avoid disruptions from likely road and public transportation closures," Governor Cuomo said. "New York State is taking all necessary precautions to prepare for this storm, and I urge residents to put safety first and plan ahead to protect themselves and others throughout the duration of this snowstorm."
The National Weather Service has issued a blizzard warning for the “potentially historic” storm in many areas in the region effective Monday at 1 p.m., as well as increased the snow accumulation and wind speed forecast. As of Sunday evening, the National Weather Service expects general snowfall from 1 1/2 to 2 1/2 feet with local amounts in excess of 3 feet, and wind gusts that may reach up to 65 MPH. Snow may fall at a rate of up to 4 inches per hour and visibility may be reduced to zero.
The Governor earlier today outlined State resources that are being stationed throughout the region, including National Guard assistance and snowplows being strategically shifted to prepare a response. The State is coordinating with its health facilities, including hospitals and nursing homes, to ensure uninterrupted service throughout the storm.