The newly re-elected Board of Education trustees took the oath of office for new three-year terms. 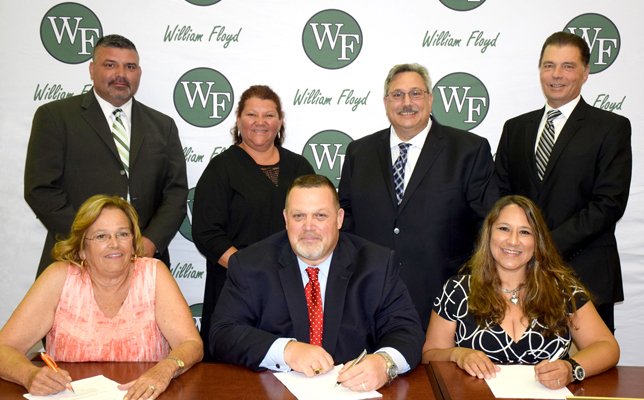 Mastic Beach, NY - July 13, 2017 - At the William Floyd Board of Education’s annual reorganization meeting held on Tuesday, July 11, Jeananne Dawson and Robert Taiani, the newly re-elected Board of Education trustees took the oath of office for new three-year terms. The Board of Education also officially appointed Lorraine Mentz as the Board’s newest Trustee to replace Anthony Speruta, who resigned because his family moved out of state. Mrs. Mentz will have to run for election in May 2018 to fill out the remainder of Mr. Speruta’s original term expiring on June 30, 2019. The Board also appointed the slate of officers for the 2017-2018 school year; they are: Robert Vecchio, President, Board of Education; Jeananne Dawson, Vice President, Board of Education; Kevin M. Coster, Superintendent of Schools; Jennifer Schildkraut, District Clerk; and Michelle Romanosky, District Treasurer.
The Board of Education adopted its meeting dates for the 2017-2018 academic year. All meetings will be held in the high school library, 240 Mastic Beach Road, Mastic Beach, with public session beginning at 8 pm, unless otherwise noted. The dates are: August 15, 29; September 12, 26; October 10, 24; November 14; December 12; January 9, 23; February 13; March 6, 20; April 18 (7:15 pm, also Budget Adoption); May 8 (7:15 pm, Annual Budget Hearing), 22; and June 5, 19. The Budget Vote and Election will be held on May 15, 2018.