Spota: "Oswald Alfaro personally delivered 240 bags of heroin to 24 Windsor Place in Central Islip and to Brentwood at 55 Bushwick Avenue an average of every three days."

Long Island, NY – July 12, 2017 – Suffolk County District Attorney Thomas Spota, joined by the Drug Enforcement Administration and the Suffolk Police Department, today announced the takedown of a heroin and cocaine distribution network based in Queens responsible for the delivery of large amounts of narcotics to two stash houses in Suffolk County in Brentwood and Central Islip.
The alleged ringleader, Oswaldo Alfaro, 35, of Jackson Heights, is charged as Operating as a Major Trafficker, an A-1 felony, as is his main Suffolk County reseller, Walter Dancey, 31, of Brentwood. Alfaro allegedly ran his drug enterprise from his personal residence. 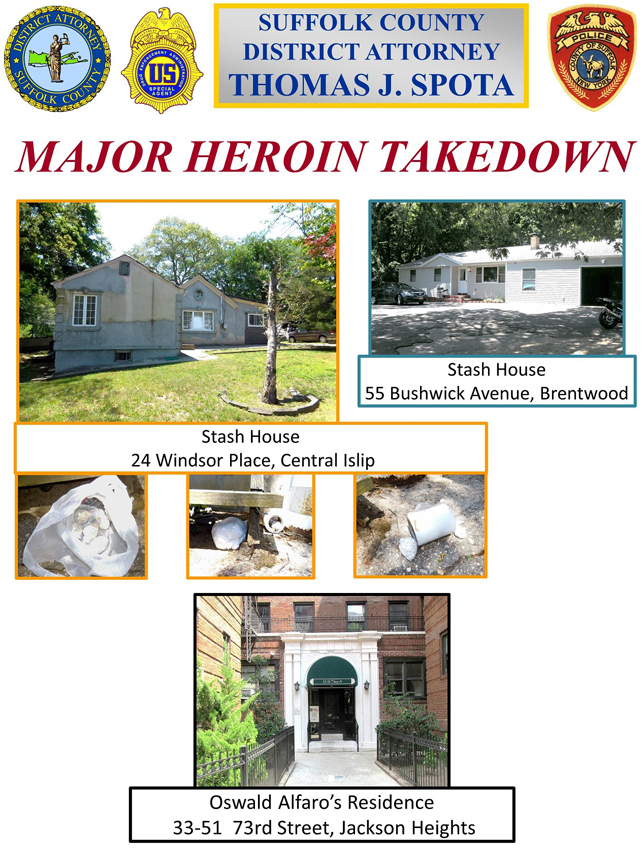 “Oswald Alfaro personally delivered 240 bags of heroin to Central Islip and to Brentwood at an average of every three days,” District Attorney Spota said. “Alfaro collected approximately $12,000 in cash for these deliveries, and strictly supervised his network of runners who would resell the narcotics to users from 8 in the morning to midnight every day.”  Alfaro’s suppliers were identified during the investigation as Juan Montoya, 27, of Elmhurst Queens who is charged with one count of Conspiracy in the second degree for allegedly supplying Alfaro with heroin.  Also charged with Conspiracy in the second degree is Giovanni Delarosa, 37, of Little Neck, Queens, who investigators believe was Alfaro’s primary supplier of cocaine.
DEA Special Agent in Charge James J. Hunt stated, "The Suffolk County Police Department and the Suffolk County District Attorney's Office deserve credit for initiating this investigation into a significant and violent drug trafficking ring in Suffolk County.  As a result of federal and local law enforcement working together, the entire drug network was shut down and will no longer be a heroin source of supply enabling addicts and overdoses in Suffolk County."
DA Spota said Oswaldo Alfaro was “a task master: he pushed his resellers in a way we have not previously seen and chastised his “employees” if sales were down. “Alfaro took inventory of his product and his cash at the end of every day,” Spota said.
The execution of six search warrants in Brentwood, Central Islip, Jackson Heights, Elmhurst, Corona and Little Neck resulted in the seizure of $125,000 in cash, three pistols including a defaced weapon, one kilo of heroin, 90 grams of crack cocaine, 195 grams of marijuana, and nine high-end vehicles including an Aston Martin, a BMW and a Mercedes Benz.
Alfaro’s resellers, charged with Conspiracy in the second degree, sold heroin and cocaine across western Suffolk, DA Spota said, including the communities of Bohemia, Ronkonkoma, Islip Terrace, Oakdale, and Smithtown. 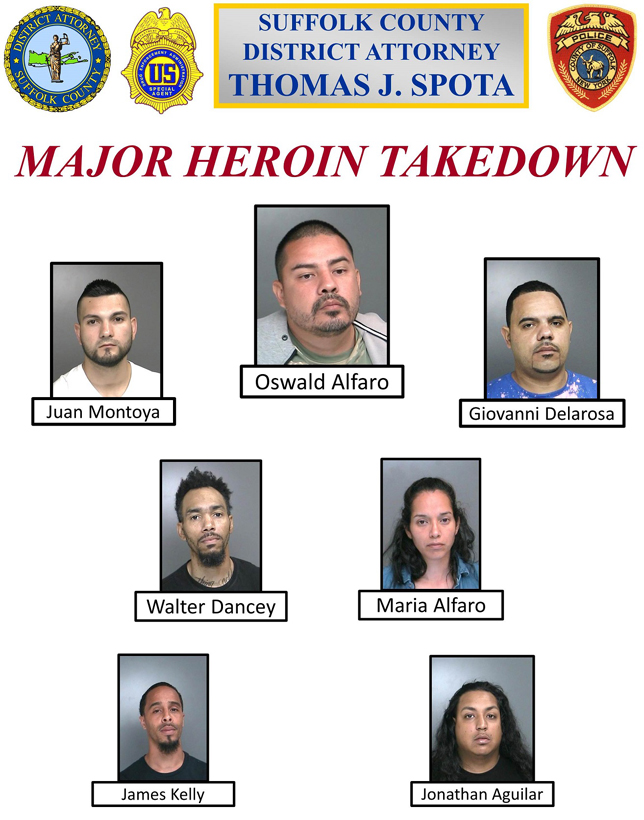