The county will be moving forward with a plan to build a new police academy on the campus of Nassau Community College. 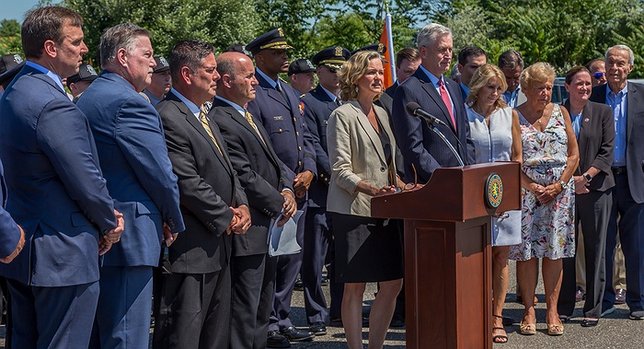 Nassau County Executive Laura Curran a plan to build a new police academy on the campus of Nassau Community College.

Mineola, NY - July 11, 2018 - Nassau County Executive Laura Curran joined with Majority Leader Richard Nicolello, Police Commissioner Patrick Ryder, members of the Nassau County Legislature and local union leaders to announce the county will be moving forward with a plan to build a new police academy on the campus of Nassau Community College. The facility will replace the current academy in Massapequa Park.
“For decades the Nassau County Police Department, one of the finest in the nation, has been without a true academy location,” said Curran. “Since 2007 the academy was located at the Hawthorne Elementary School and leased by the county for $700,000 per year. That is a waste of taxpayer dollars. The new Center for Training and Intelligence (CTI) will stop that waste and quickly become a premier location in Nassau County.”
The new 89,000-square-foot facility will be located on the campus of Nassau Community College and will include an asset forfeiture and intelligence lead development center; a 500-seat auditorium; a recruit cente; an emergency vehicle operations course; a physical training and defensive tactics warehouse; 10 multi-purpose classrooms that can be combined into 5 larger 70-person rooms for training; and a Sensitive Compartmented Information Facility (SCIF--pronounced ‘skiff’) to process classified information. It will be the only such location on Long Island.
The project is expected to cost $54 million bond for both the construction and project management. Groundbreaking is expected to be in late fall.
“Education and community engagement are a major focus of the NCPD and this facility will not only provide space for basic training but also a venue for community meetings, police awareness campaigns and youth programs,” said Curran. “The need for the NCPD to construct its own training facility has been discussed for decades. We don’t want to waste any more time. Let’s get a shovel in the ground.”
“The CIT is a true investment in public safety and the community,” said NCPD Commissioner Patrick Ryder. “From training our future and current officers to expanding our community outreach there will be no other facility like it anywhere.”
“The Nassau County Police Department is one of the largest in the Country,” said Nassau County Detectives Association President John Wighaus. “Under the leadership of Commissioner Ryder, we will now have a state-of-the-art police academy to train our new recruits and continue to train our veteran police officers, detectives and supervisors.”
Community services and programs available in the CIT include:
The centralized location of the CIT makes it accessible by public transportation and will provide easy access to the nineteen village and city police departments situated throughout Nassau County. The facility is also close to New York City and Suffolk. Its presence on the Nassau Community College campus will also play an important part in attracting new police recruits. In addition, the NCPD will enter into an exciting partnership with Nassau Community College’s Criminal Justice program.
“Nassau County has spent approximately $8 million in rent alone for the current academy location,” said Curran. “That is clearly a waste of taxpayer money.”
The CIT will also feature important components of a new, modernized training facility, including:
“The police academy project is one that appears to be worthy of our support,” said Minority Leader Kevan Abrahams. “We are working hard to finalize a comprehensive 2018 capital plan that will encompass this and other worthy projects that will improve the quality of life for all of our residents.”
“On behalf of every current and future member of the Nassau County Police Department, we thank the County Executive and the members of the legislature for their continued support and dedication to public safety,” said Ryder.
“I want to thank my colleagues in the legislature, especially Majority Leader Richard Nicolello and Minority Leader Kevan Abrahams, for pushing this project forward and making it a reality,” said Curran. “This new facility will play a major role in keeping our residents, and the entire county, as safe as possible. It’s a new day for the Nassau County Police Department.”