The three men were in possession of 1,500 horseshoe crabs. The legal limit without a permit is five and with one is 30. 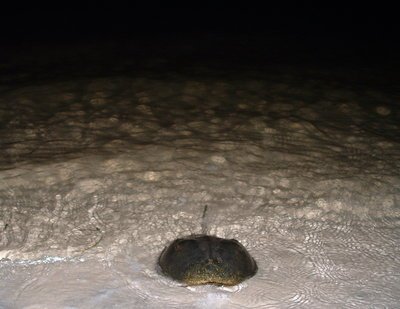 "Across the entire eastern seaboard, there is growing concern about the impact declining horseshoe crab populations can have on migratory birds such as the red knot," Regional Director Peter A. Scully said. "Those who violate the law should be aware that DEC's Environmental Conservation Officers are skilled law enforcement professionals who will take swift action to protect the environment and vulnerable wildlife populations."

At 9 p.m. on June 2, the ECOs were on a designated horseshoe crab detail on the Great South Bay in Brookhaven when they stopped Moscardino’s 1998 Carolina Skiff after noticing he’d been navigating without lights. Inside were 333 horseshoe crabs with all but five being illegal. Under New York State salt water fishing regulations you’re allowed up to five horseshoe crabs a day in your possession.

During Moscardino’s processing, another boat without navigation lights was spotted by the ECO’s using night-vision binoculars. On it were Hartmann Jr and Sharkey. Of the three arrested, only Sharkey had a DEC permit for harvesting horseshoe crabs. He also had a Foodfish & Crustacea Dealer/Shipment permit.

The ECO’s counted for two hours and found the three in possession of 1,107 horseshoe crabs. Hartmann was able to keep five and Sharkey kept 30, the legal commercial limit. The horseshoe crabs were trucked and released back in to the Great South Bay.