Brooks: "I will continue to closely monitor the situation and advocate for any improvements that will make this burdensome commute easier." 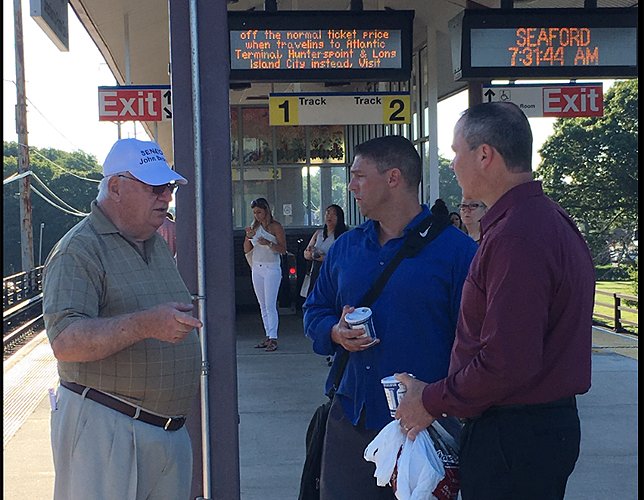 Senator John E. Brooks speaking with two commuters at the Seaford LIRR station during the "Summer of Hell."

Seaford, NY - July 10, 2017 - Senator John E. Brooks joined Long Island Railroad commuters Monday morning, July 10, at the Seaford station as the “LIRR Summer-of-Hell” kicked off. Senator Brooks spoke with commuters, railroad employees and others during the morning rush hour about how the summer track work affected them.
Senator Brooks said, “I’m out here on Day One of the ‘Summer of Hell’ because LIRR commuters need to know that they’re not alone, and even when things appear to be going well, that I won’t stop voicing their concerns until they get the commute they deserve. This is likely to be a summer full of headaches, and I want commuters to know that I will never abandon them. I will continue to closely monitor the situation and advocate for any improvements that will make this burdensome commute easier.”