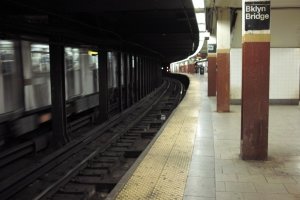 The New York Police Department and Brookhaven National Labs with assistance from the Metropolitan Transit Authority began the largest urban airflow study to date yesterday in order to better understand the danger of airborne contaminants. In conducting this study, the organizations hope to discover just how CBR (Chemical, Biological and Radiological) weapons would behave if dispersed in and above New York City’s subway system. The first of three planned days of research, Tuesday’s study began around 6:00 AM and concluded at about 3:00 PM.

Formally titled the Subway-Surface Air Flow Exchange (S-SAFE), the project has been funded by a $3.4 million Department of Homeland Security Transit Security Grant.

“The NYPD, in partnership with the MTA, is responsible for keeping more than 5 million daily subway customers safe and secure. This study will bolster the NYPD's understanding of contaminant dispersion within the subway system,” said MTA Acting Chairman Fernando Ferrer.

To test the dispersal patterns of potential airborne toxins, harmless tracer perfluorocarbon gasses were released at subway stations and above-ground locations at several points throughout Manhattan; roughly 200 air sampling devices were then used to detect where the tracers travelled. Perfluorocarbon gasses are odorless and colorless in addition to being harmless to both people and the environment, making them ideal for conducting the study without impacting or alarming commuters.

Data collected from the tests is expected to help police and other emergency responders decide where best to place CBR detectors and determine the safest paths for evacuation in the event of an actual attack or chemical spill.

“The NYPD works for the best but plans for the worst when it comes to potentially catastrophic attacks such as ones employing radiological contaminants or weaponized anthrax,” Police Commissioner Ray Kelly said of the study. “This field study with Brookhaven's outstanding expertise will help prepare and safeguard the city's population in the event of an actual attack.”

Two more tests are planned to take place, though the project is dependent upon cooperative weather. No additional tests will be run today, but Brookhaven National Labs will give notice before the second and third study dates. Air sampling will be conducted in all five boroughs.

Brookhaven Lab Director Doon Gibbs expressed his enthusiasm for the study, stating “Brookhaven Lab is a world leader in the use of tracer gases to study airflow, and we are excited about this opportunity to apply that expertise to enhancing the safety of New York City residents and emergency responders.”

This study begins shortly after the LIRR engaged in a training program with paramedic students to prepare for a potential rescue and triage situation through a simulated “MCI” (Mass Casualty Incident).