Though a direct hit from Arthur is exceedingly unlikely, the effects of the storm are already being felt on LI. 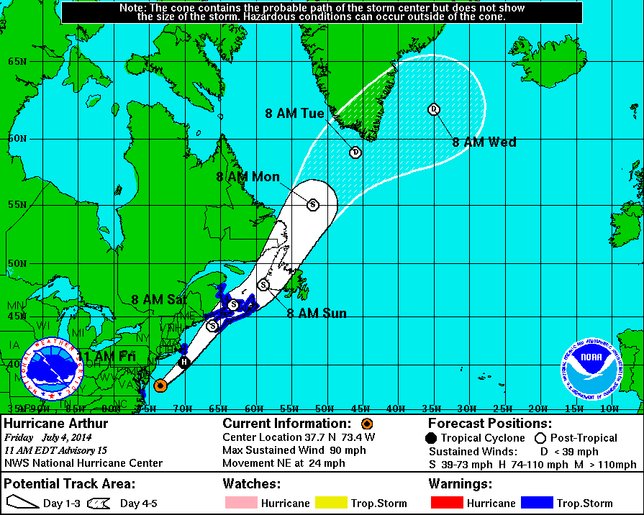 Hurricane Arthur briefly made landfall on the coast of North Carolina last night as a Category 2 storm with sustained winds of 96 mph, but has since moved back into the Atlantic Ocean with slightly reduced speeds of 90 mph, falling back to the strength of a Category 1 hurricane.

Present weather models show Arthur traveling well east of Long Island by the time it travels this far north, but the effects of the storm are being felt on the Island. Rainy weather has already caused some Fourth of July celebrations to postpone their festivities.

An Urban Flood Advisory has been put in effect for Suffolk County through 12:45 PM for the potential of minor flooding in poor drainage areas, but property damage is expected to be minimal and flooding will not be immediately life threatening.

A more significant Flash Flood Watch remains in effect for the whole Island through 10 PM on July 4th; flash flooding is most likely to occur in areas of poor drainage and on roadways, making it particularly hazardous for motorists.

The National Weather Service has placed a High Surf Advisory on the South Shore until 4 PM Saturday as surf height could reach 6-10 feet. Minor beach erosion could occur, and enduring rip currents will make swimming and boating dangerous.

Rain will continue to fall throughout the day, but will most likely dissipate in the evening. There is only a 30% chance of rain after 7 PM for most of LI, though the East End will still face a 60% chance of precipitation which could put fireworks shows on hold.

For the most up to date forecast information visit the Long Island Weather Center.

Take a look at traffic conditions on the Fourth before you leave the house with the Long Island Traffic Cameras.