Sgt. Tuozzolo was fatally shot November 4, 2016, when he was responding to a report of a disturbance in the Bronx. 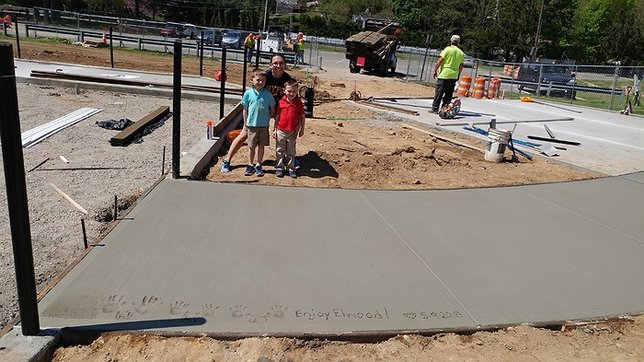 Lisa Tuozzolo with sons Austin and Joseph on May 9, 2018 with their newly created handprints in the spray park’s sidewalk at Elwood Park.

Elwood, NY - July 3, 2018 - Huntington Town Officials will be joined by local officials, NYPD, SCPD and the Tuozzolo family for the grand opening of the Sgt. Paul Tuozzolo Memorial Spray Park, the Town’s first spray park, at Elwood Park on Wednesday, July 11, at 1:00 PM.
Lisa Tuozzolo, her sons, and NYPD Lt. Christopher Pizzo have been involved with the planning and design of the spray park from conception to construction, joining Town Supervisor Chad A. Lupinacci, his staff and the Town’s Civil Engineering Department at various progress meetings throughout the year. On May 9, Mrs. Tuozzolo and her sons Austin and Joseph stopped by the construction site to create handprints in the sidewalk at the park.
NYPD Sgt. Paul Tuozzolo was fatally shot November 4, 2016, when he and a group of officers were responding to a report of a disturbance in the 43rd Precinct in the Bronx, where he worked for the last 10 years of his career. They believed they were responding to home invasion, but it turned out to be a domestic incident. A dispatcher told responding units that the man who had broken into the home left in a car that was located about six minutes later. Police, including Sgt. Tuozzolo, approached the vehicle. The suspect opened fire and shot Sgt. Tuozzolo in the head and upper torso and another officer in the leg. Sgt. Tuozzolo died of his injuries. The suspect was subsequently killed by a police trainee.
Sgt. Tuozzolo, a 19-year-NYPD veteran, grew up in Bayville, but moved to Huntington with his wife, Lisa, and they were raising their family here, in a neighborhood not far from Elwood Park.
Attendees at the grand opening will have a chance to win prizes from Elwood Public Library.
The Sgt. Paul Tuozzolo Memorial Spray Park is 4,900 square feet in area with 2,500 square feet of active play features utilizing all push-button technology for efficient water use; the spray pad water runoff will be collected and reused for field irrigation at Elwood Park. Official hours for the spray park will be 11 AM to 8 PM (due to this year’s planned playground camp being housed at Elwood Park, spray park hours during camp days Monday through Friday will be 12:30 PM to 8 PM through August 10).
Children under 13 years old will be able to use the spray park; parents/guardians must show a Resident Recreation Photo ID (exception only for those who have Picnic Permits for that day), which may be purchased at Town Hall in the Parks and Recreation Department (Room 103) Monday through Friday, 9:00 AM to 4:00 PM, call (631) 351-3089 for information. Recreation ID Cards may also be purchased at the Dix Hills Ice Rink, call for hours, (631) 462-5883. This summer, non-residents may only enter the spray park if they are accompanied by a resident with a Recreation ID card.