Major Case Bureau detectives are investigating a Bank Robbery that occurred on Saturday, June 27, 2015 at 2:32 pm in Rockville Centre. 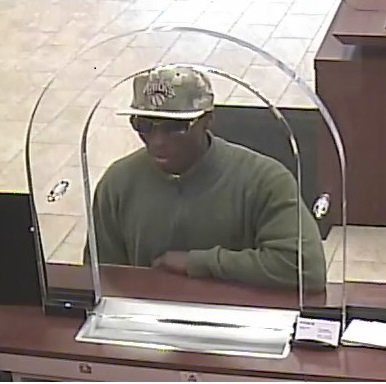 According to detectives, a male black subject entered Chase Bank, 10 North Village Avenue, and approached a teller window. After producing a demand note for money and making verbal threats about using a gun (none observed), the teller complied and gave the subject an undisclosed amount of cash. The subject then fled the bank and was last seen heading northbound on North Village Avenue towards Sunrise Highway.

The subject was described as being in his mid-twenties, 5’7”-5’8” tall with a dark complexion and a slim build. He was wearing an olive green NY Knicks baseball cap, Aviator style sunglasses and an olive green pullover shirt (pictured right). No injuries were reported.