Donna Cioffi and Linda Bonanno were recognized for their efforts on the frontline of breast cancer education and prevention. 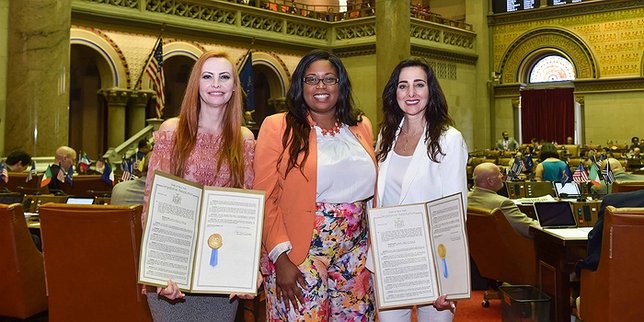 Babylon, NY - June 28, 2018 - New York State Assemblywoman Kimberly Jean-Pierre (D-Babylon) recently recognized Donna Cioffi and Linda Bonanno, of First Company Pink, for their dedicated efforts on the frontline of breast cancer education and prevention. Donna and Linda were introduced on the Assembly floor and were presented with official copies of an Assembly resolution that passed unanimously in April, proclaiming July 6, 2018 as “got checked?” day in New York State. “got checked?” is a vital campaign focused on educating youth about breast cancer risks with an emphasis on intervention and early detection.
“Donna and Linda have demonstrated an unwavering commitment to breast cancer prevention through education, andthe “got checked?” campaign will undoubtedly save lives,” said Jean-Pierre. “It was a pleasure to be able to recognize these fine ladies on the Assembly floor for their efforts.”
“This resolution is such an important victory and a reminder to us and all women across New York State to regularly get checked,” said Cioffi.
Through First Company Pink, Donna and Linda—who are breast cancer survivors themselves—have long campaigned for revising the current mammogram age recommendation. They have continued to advocate for Shannon’s Law, which would lower New York’s age requirement for insurance companies to cover yearly mammogram screenings from 40 to 35.
“This is another important piece of the puzzle in our mission to educate women of all ages to remain proactive and vigilant,” said Bonanno.
Jean-Pierre is the prime sponsor of Shannon’s Law (A.6731-C), which unanimously passed in the Assembly for the second consecutive year.