New England Patriot Aaron Hernandez has been arrested in relation to the death of his acquaintance, Odin Lloyd. 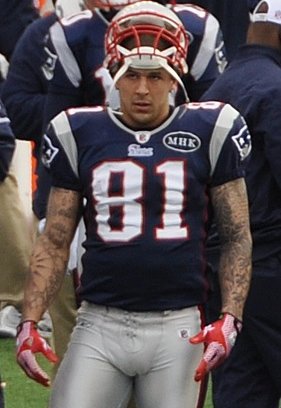 Since bringing on Rex Ryan as head coach, the New York Jets have earned themselves a spot as ringleaders in the NFL’s most absurd media circus, but another AFC East team has positioned itself to take that crown this offseason. After picking the ever-distracting Tim Tebow up following his release from the Jets, reports surfaced that Russian President Vladimir Putin had pilfered one of the New England Partiots’ Super Bowl rings when owner Robert Kraft visited Moscow in 2005.

The tabloid-worthy headlines plaguing a team traditionally known for keeping a low public profile took a rather grim turn on Wednesday morning as star tight end Aaron Hernandez was arrested in relation to the homicide of Odin Lloyd, a semiprofessional linebacker for the Boston Bandits. Hernandez was released from the Patriots less than two hours after his arrest.

“A young man was murdered last week and we extend our sympathies to the family and friends who mourn his loss,” the team said in its announcement of the tight end’s release. “Words cannot express the disappointment we feel knowing that one of our players was arrested as a result of this investigation. We realize that law enforcement investigations into this matter are ongoing. We support their efforts and respect the process. At this time, we believe this transaction is simply the right thing to do.”

That statement was made well before the grounds on which Hernandez was taken into custody were public knowledge. During the arraignment in an Attleboro court, he was charged with five illegal firearms-related counts and the murder of Odin Lloyd; he pleaded not guilty and was held without bail.

Lloyd was shot five times “execution-style” less than a mile from Hernandez’s home according to the Bristol County prosecutor, William McCauley. Surveillance videos from the homes of neighbors and the former Patriots player linked him to the time and location of Lloyd’s death. Police returned to a wooded stream near Hernandez’s house in the afternoon in search of evidence, but uncovered nothing.

In a statement on yesterday’s developments, the NFL said “The involvement of an NFL player in a case of this nature is deeply troubling. The Patriots have released Aaron Hernandez, who will have his day in court. At the same time, we should not forget the young man who was the victim in this case and take this opportunity to extend our deepest sympathy to Odin Lloyd's family and friends.”