Judge Robinson is the first African American to be elected SCBA President in its history. 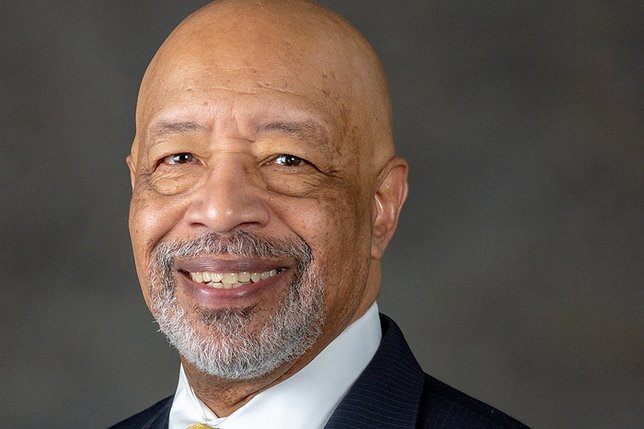 The 112th installation of officers and directors, elected by the membership at the SCBA’s Annual Meeting, was held by the Zoom Webinar platform on June 5, 2020 to an audience of over 400 members, colleagues, friends and family. A most auspicious occasion, as Judge Robinson is the first African American President to be elected President in its history. Supreme Court Justice, the Honorable William G. Ford, administered the Oath of Office to him.
As Acting County Court Judge, Judge Robinson presides over the Suffolk County Drug Court and the Suffolk County Mental Health Court.  Prior to becoming a Judge, he was a New York State Assistant Attorney General.
In 2006, Judge Robinson was the Chief Deputy Town Attorney for the Town of Brookhaven where he was the head of the Litigation group supervising the prosecution of town ordinance violations and town civil litigation defense.  Judge Robinson spent 25 years in the Suffolk County Attorney’s Office, General Litigation Bureau rising to Principal Assistant County Attorney.
In May 2019, Judge Robinson was elected President Elect of the Suffolk County Bar Association.  As an active member of the SCBA, Judge Robinson has served as a member of the Executive Committee, the Board of Directors, he chaired the Bench Bar and the Judicial Screening Committees, as well as a member of the Nominating Committee.  He also served as a member of the SCBA’s Professional Ethics & Civility Committee and co-chaired the District Court Committee.  He is a member of the New York State Bar Association’s House of Delegates.
Judge Robinson was the founding President of the Amistad Long Island Black Bar Association and has written numerous articles and has spoken publicly about the Drug and Mental Health Courts and the importance of diversity in the legal profession.
Judge Robinson is a graduate of Howard University in Washington, D.C., where in 1970 he participated for several weeks, with 86 other students, in a voter education and registration drive in Montgomery, Birmingham and Mobile, Alabama. After graduating Howard, he graduated from the Antioch School of Law. He later studied at New York Law School.
Judge Robinson is very active in his community. He mentors young students to achieve personal growth and academic excellence. He serves as Chair of the Board of Directors of “Keep Your Change” (KYC),a student academic support group for elementary and high school students. He is married to Dr. Pamela C. Allen and is a proud father, and grandfather.
Rounding out the slate of officers who were installed with Judge Robinson: President Elect Daniel J. Tambasco, Senior Trial Attorney withGentile & Tambasco, GEICO staff counsel, First Vice President Vincent J. Messina, Jr., a partner with the firm of Sinnreich, Kosakoff & Messina, LLP, where a significant portion of his practice is devoted to litigation in the trial courts.  Second Vice President Cornell V. Bouse, a solo practitioner who concentrates his practice exclusively in the criminal law field, Treasurer Patrick McCormick, a past Dean of the Suffolk Academy of Law, is a senior partner at Campolo, Middleton & McCormick, LLP and our incoming Secretary is Suffolk County Supreme Court Justice, the Hon. John J. Leo.
New Directors installed to a 21 member Board of Directors are: Jarrett M. Behar, with the firm of Certiliman, Balin, Adler & Hymann; Catherine E. Miller, Suffolk County Court Attorney Referee; David R. Okrent, a solo practitioner and Daniel A. Russo, Suffolk County 18-b Administrator.
The Officers and Directors were sworn in by the Hon. Hector D. LaSalle, NY Supreme Court, Appellate Division, Second Judicial Department.
The Suffolk County Bar Association, founded in 1908 to serve the needs of the local legal community and the public, is a professional association comprised of 3,000 attorneys and judges. The Academy of Law is the education arm of the SCBA, the Speakers Bureau provides speakers on a wide variety of legal topics to schools, civic organization and libraries.  The Lawyer Referral Service provides 24-hour access to an on-line lawyer referral service, whereby the public can be referred to attorneys with expertise in a variety of areas of the law, the Pro Bono Project which provides legal services for the disadvantaged, as well as the Charity Foundation whose mission is devoted to the well-being and functioning of children in Suffolk County. For further information call the SCBA at (631) 234-5511.