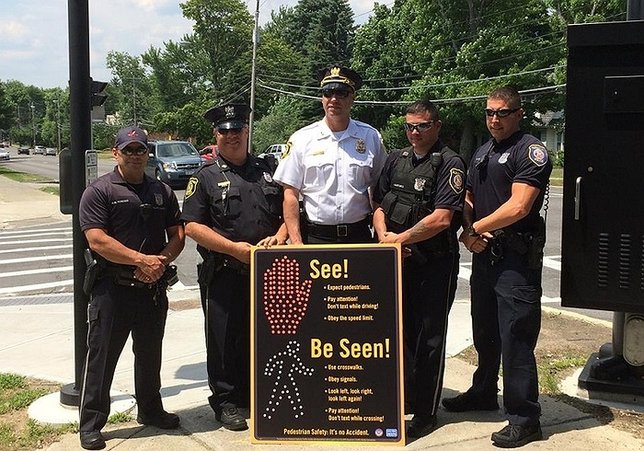 Photo by: New York State Department of Transportation, via Facebook.

"Supporting these education programs and enforcement efforts will set a new safety standard for pedestrians and motorists and help make this state’s roadways safer for all,” Governor Cuomo said. "Through these efforts, we will help prevent avoidable tragedies and save lives."

The New York State Pedestrian Safety Action Plan, which the Federal Highway Administration supports, takes a three-pronged approach to improving safety during a campaign that will run through State Fiscal Year 2020. It is being implemented cooperatively by the New York State Department of Transportation focusing on engineering improvements, the State Department of Health conducting public education and awareness campaigns, and the Governor’s Traffic Safety Committee coordinating increased law enforcement.

The plan targets improvements in communities outside of New York City. The city has an established pedestrian safety program that receives millions in federal funding administered by NYSDOT.

The pedestrian safety plan supplements other traffic safety programs, including this year’s Highway Safety Improvement Program grant awards for projects that will enhance safety and mobility on roadways across the state. A list of HSIP project awards by region is available here.

“Safety is our top priority and the Pedestrian Safety Action Plan is one more example of how Governor Cuomo’s leadership is making New York State a safer place to live, work and play,” Department of Transportation Commissioner Matthew J. Driscoll said. “This initiative will make it easier to walk in cities, towns and villages across the state, ensuring that people can get to where they’re going safely.”

Acting GTSC Chair and Department of Motor Vehicles Executive Deputy Commissioner Terri Egan said, “The GTSC supports year-round efforts to prevent pedestrian crashes, injuries, and deaths, and emphasizes the responsibility that all New Yorkers have to share the road. We are proud to team up with DOT and DOH, always our partners in traffic safety, to implement this action plan and enforce the law so that all pedestrians get to their destinations safely.”

Department of Health Commissioner Dr. Howard Zucker said, “Pedestrian-related traffic injuries and fatalities continue to be a major public health concern in New York State. These incidents are preventable, and we all have a shared responsibility to create and sustain a safe traffic environment. I look forward to working with our state and local partners to coordinate and put into action the educational strategies in the New York State Pedestrian Action Plan.”

Peter Osborn, FHWA NY Division Administrator said, “The Federal Highway Administration is pleased to partner with the New York State Department of Transportation, the Governors Traffic Safety Committee, the New York State Department of Health and other safety partners on the development and implementation of the Pedestrian Safety Action Plan. We commend our partners for being proactive here in the state of New York to combat this national issue improving pedestrian safety.”

Pedestrian Crash Analysis
The need for a plan is clear. Highlights of key findings from an analysis of five years of statewide traffic safety data from 2009-2013 include:

The Safety Action Plan, part of the state’s broad effort to improve traffic safety, supports the State’s Complete Streets Law and is consistent with the Americans with Disabilities Act Transition Plan. Governor Cuomo signed the Complete Streets Law in 2011, requiring state, county and local agencies to consider the safety and convenience of all users when developing transportation projects that receive state and federal funding and are subject to NYSDOT oversight.

Funding for the plan’s implementation will come from the federal Highway Safety Improvement Program, as well as other state and federal funding sources.

Systemic Approach to Engineering Improvements
The plan calls for a systemic approach to proactively address widespread safety issues and minimize the potential for crashes by implementing low-cost countermeasures throughout the roadway network.

Pedestrian safety site evaluations will begin this year on state-owned roadways, including at 2,000 crosswalks without traffic signals and 2,400 signalized intersections. The second year of the plan, NYSDOT will fund local pedestrian safety initiatives identified through a project solicitation. Information about that funding will be available later in the year.

Improvements at crosswalks without traffic signals will include pavement markings and signs. Up to 400 locations will receive enhanced treatments as warranted, including refuge islands and attention-grabbing light beacons.

At signalized intersections, high visibility crosswalk markings and additional signs will be installed. Signalization will be enhanced with extended crossing times, countdown timers that tell pedestrians how many seconds they have to cross the street and leading pedestrian intervals that help make pedestrian more visible to motorists by giving them a head start before traffic can turn onto the street. These sites also will be evaluated for enhanced treatments, such as pedestrian refuge islands or median and curb extensions.

In addition, NYSDOT will evaluate for potential safety improvements five corridors with a higher-than-expected number of pedestrian crashes.

At the same time, the State Department of Health will produce and place public service announcements about pedestrian safety, engage local traffic safety boards, schools and others in public outreach, and provide training for safety organizations.

The Governor’s Traffic Safety Committee will encourage police agencies to apply for traffic safety grants in the 20 communities with the highest number of pedestrian crashes, provide education for law enforcement and justice officials, and organize an annual pedestrian safety law enforcement blitz.

Focus Communities
The plan calls for the communities with the highest number of crashes from 2009 to 2013 outside of New York City to be given extra attention to improve pedestrian safety. That will be done by providing education, enforcement and funding for safety improvement projects through a competitive grant solicitation. A list of the communities is attached.

Education and Enforcement Initiatives
A targeted enforcement campaign by police agencies along the corridor starts today and runs through the end of next week with the goal of improving both driver and pedestrian safety.

Police will hand out a warning notice, developed by GTSC and DOH, which details State law regarding pedestrians. They also may issue tickets to both pedestrians and motorists for violating the law. In addition, police will have supplies of informative motorist and pedestrian safety tip cards to distribute.

Furthering the education effort, a pocket guide covering vehicle and traffic law related to pedestrians was developed for police personnel. It serves as a resource that law enforcement personnel can keep in their patrol car glove boxes for quick reference.

In addition, a fact sheet will be distributed as part of outreach to local courts to inform them of the campaign and help reinforce the importance of the issues that are being addressed with this focus on pedestrian safety.

The education campaign emphasizes the “See! Be Seen!” message for driver and pedestrian awareness. The “See!” aspect of this campaign encourages drivers to:

The “Be Seen!” aspect of this campaign encourages pedestrians to:

Congressman Eliot Engel said, “Those of us who live in or around the busy streets of New York City know we can never be too safe when it comes to protecting pedestrians. I support Governor Cuomo’s New York State Pedestrian Action Plan, which is supported by the Federal Highway Administration and will undoubtedly improve public health and safety.

Congresswoman Nita Lowey said, “Pedestrian safety is critical to health, safety and quality of life in our communities. This is a great example of how we can work across levels of government to make a difference in the lives of New Yorkers.”

Congressman Steve Israel said, “Knowing that Long Island is home to some of the most dangerous roads in the state, I have been a relentless fighter for resources to make our roads safer. I fought in Congress to make certain that policies were included in the long-term highway bill to ensure safety for all travelers is a priority for planning and building roadways. I applaud Governor Cuomo for launching this initiative and will continue to be a partner in efforts to keep our streets safe.”

Congressman Paul Tonko said, “These infrastructure improvements will make it easier for New Yorkers to commute and recreate in the Capital Region and throughout the entire state. I thank Governor Cuomo for recognizing these local needs and acting on them in a way that boosts our economy and creates quality jobs in our area.”

Congresswoman Kathleen Rice said, “Pedestrian safety is both a public health priority and local economic priority. Over the past several years, the Town of Hempstead in our district has seen the highest number of pedestrian-involved crashes in the entire state – that’s a serious problem for parents raising kids in our communities, for residents who deserve to be able to walk and run safely in our neighborhoods, and for business-owners who rely on foot-traffic in our business districts. The Governor’s new initiative offers an opportunity to confront this problem comprehensively through smarter engineering, education and enforcement, and I’m pleased that the Town of Hempstead has been designated a focus community so that we can give pedestrian safety in our district the full attention it deserves.”

Congressman Lee Zeldin said, “This critical initiative, secured through the bipartisan federal highway bill that passed Congress last year, will help to make improvements to our community’s local infrastructure, increasing walkability and pedestrian and motorist safety in Suffolk County. As a member of the House Transportation and Infrastructure Committee, I strongly support improving our local roadways and will continue working in Congress to strengthen Long Island’s infrastructure.”

The educational campaign stresses that drivers and pedestrians must avoid distractions and not text or use mobile devices while driving or while walking across a street.
For more information, visit Governor Cuomo’s new pedestrian safety website. It provides an overview of the pedestrian safety plan, examples of highway safety improvements that can enhance pedestrian safety and tips for safely navigating roadways as a pedestrian.