Dunkin Donuts isn't known for its healthy food options, but hopes to change that image by introducing gluten-free products before its competitors. 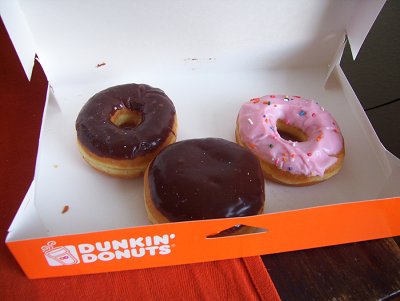 As fast food restaurants attempt to drive up revenue and improve their image by offering healthier menu option, Massachusetts-based coffee and doughnut proprietor Dunkin Donuts will be introducing two new choices to their customers: gluten-free blueberry muffins and cinnamon sugar doughnuts will be hitting their shelves later this year according to an e-mail sent out by the company.

Introduction of the new treats means that Dunkin Donuts has beat competitors such as Starbucks and McDonalds to the punch in providing gluten-free pastries. Starbucks has toyed with the idea of a gluten free menu selection in the past—rumors of which intensified after the Seattle-based company bought a bakery specializing in organic breads last year—but has yet to announce plans to actually produce one.

The new doughnut and muffin will afford those who suffer from celiac disease a viable pair of pastry choices when they visit Dunkin Donuts locations, and are liable to be marketed in an effort to make the eatery appear healthier. That strategy could very well pay off, as data from the Nielsen research company shows Americans are becoming increasingly interested in foods made without gluten, and Packaged Facts  reports that sales of foods labeled “gluten-free” exceeded $4 billion last year.

The absence of wheat, however, does not necessarily mean the new items will be any healthier than Dunkin’s current lineup of muffin and doughnuts. The new cinnamon doughnut and blueberry muffin could very well be just as calorically dense and full of sugar as existing menu options, making them of questionable added nutritional benefit for those who do not have celiac disease. While Dunkin Donuts has recently added options healthier than its normal fare, including egg whites and turkey sausage breakfast sandwiches, it has not shied away from fatty and high-calories dishes either. A fried egg and bacon sandwich placed inside a glazed doughnut was added to the menu earlier this month.