$2,000 reward offered for information that leads to the arrest of the individual who abandoned a dog in Coram. 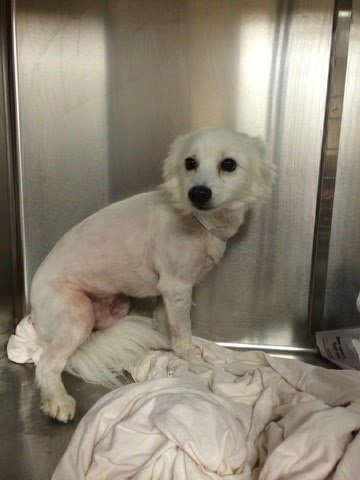 Coram, NY - June 15, 2014 - The Suffolk County SPCA is offering a two thousand dollar ($2,000) reward for information leading to the arrest and conviction of the person responsible for abandoning a dog in Coram.
On Thursday, June 12th a call came into the Suffolk County SPCA Office from a complainant who stated that in the morning she witnessed a blue colored SUV stopping along Sun Valley Dr. in Coram, open the passenger door, and push a small white colored dog with a bushy tail out of the door and then drive away. The witness stated that the subject is a white male wearing a baseball hat.  The dog was sitting by the curbside and appeared to be very nervous.
Chief Roy Gross of the Suffolk County SPCA said that it's a crime to abandon animals and said that this was a cowardly act to push such a sweet dog out of the SUV and abandon it.
Anyone with information is asked to call the Suffolk County SPCA at 631-382-7722.  All calls will be kept confidential.