The Yankees and Mets both played the teams with the best records in their respective leagues this week, and suffered heavily because of it. 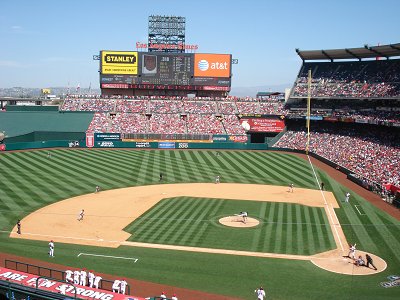 The Yankees took 3 of 4 from Seattle to begin their tour of the West Coast, but faced a much stiffer challenge in Oakland. The Athletics are currently tied with Boston for the best record in the American league, and showed New York exactly how they got there when former Yankee Bartolo Colon took the mound against CC Sabathia on Tuesday. Colon pitched six scoreless innings in sharp contrast with CC, who allowed a run in both the first and second, a 3-run homer in the fourth, and another run in the sixth with a wild pitch.

The tide shifted in the Yanks’ favor when the bullpens took over in the seventh inning; New York’s pen held Oakland scoreless for the final three innings while Mark Teixeira and Vernon Wells’ RBI singles in the eighth represented the Yankees’ first runs of the game. Teixeira drove in 2 more runs in the ninth with another single, but the late-game rally fell short. Oakland defeated New York 6-4.

Game 2 saw the A’s score first once again when Brandon Moss hit a 2-run homer off Phil Hughes in the second. They added another run to the lead with a double in the fifth before Tex’s sac. fly in the sixth brought in the Yankees’ first run. Jayson Nix smacked in an RBI single in the seventh to cut Oakland’s lead down to 3-2, but Moss blasted in another homerun to start the bottom of the eighth; the A’s scored once more to put the Yanks down 5-2.

Hoping to avoid a sweep, Robinson Cano started Thursday’s game with a homerun that brought Brett Gardner home with him to take a 2-0 lead in the first inning. Hiroki Kuroda allowed two runs to score in the third, tying the game 2-2, but was otherwise perfect through 8 complete innings pitch, retiring the Athletics’ batters in order in each of the other seven innings.  Jarrod Parker found similar success against New York’s lineup, holding them scoreless through seven innings after Cano’s initial blast.

The game went into extra innings still tied 2-2, but it did not end quickly once they started. Both teams went through 6 relief pitchers after their starters left in eighth as a second complete game’s worth of scoreless baseball began. Mariano Rivera was brought on for a rare non-save situation midway through the bottom of the 18th inning, but gave up a walk-off RBI single to end the 5 hour, 35 minute contest. The runner who scored, and thus the loss, was credited to Preston Claiborne as New York was swept by the 3-2 defeat.

The team began the last leg of its road tour in Anaheim last night, but before New York took the field against LA Kevin Youkilis was placed back on the 15-day DL, forcing the Yankees to call up Thomas Neal from the minors (Brenan Boesch was unavailable, as he was also on the DL for Scranton/Wilkes-Barre). Pitcher Adam Warren was optioned to the minors to make room for Chris Bootcheck and give the bullpen a fresh arm after Thursday’s 18-inning marathon.

Andy Pettitte gave up a run in the first inning, granting the Angels an early 1-0 lead. That deficit carried until the fourth when, after Jayson Nix and Teixeira grounded out to start the inning, Cano got on first with a single. Wells’ single moved him to third, and Thomas Neal was walked to load the bases. David Adams broke the Yanks’ 20-inning scoreless streak with a single that brought Cano and Wells home, giving New York a 2-1 lead.

CJ Wilson walked the bases loaded a second time, but escaped further damage on Austin Romine’s inning-ending groundout, and Pettitte allowed a sacrifice fly in the bottom of the fourth to tie the game at 2-2. The Angels broke the tie in the sixth with an RBI single, then added another in the seventh to go up 4-2. Chris Bootcheck took over in the eighth, but allowed a third RBI single; LA beat New York 5-2.

With four straight losses, the Yankees now trail Boston by 3 games and are 1.5 games behind Baltimore. They will try to even the series with the Angels at 7:15 PM tonight.

The Mets got off to a strong start against the team with the best record in the MLB on Tuesday; an Omar Quintanilla homerun and Marlon Byrd sacrifice fly in the bottom of the first put New York up 2-0 against St. Louis’ young gun, Michael Wacha. After Wacha settled down, however, the Cardinals cut the lead down to 2-1 in the fourth inning. They followed in the fifth by capitalizing on a Daniel Murphy throwing error which allowed Jon Jay to reach base; a double moved Jay to third and a groundout allowed him to score, tying the game at 2 apiece. St. Louis took the lead as a second groundout drove in their third run and a subsequent homer put the Mets down 6-2.

Jeremy Hefner stayed in through the sixth, but was taken out for Greg Burke in the seventh. The pitching change accomplished little as another error, this time by right fielder Kirk Nieuwenhuis, allowed Yadier Molina to reach second base and score on Matt Holiday’s ensuing single. New York went on to lose 9-2.

Game 2 got off to a similar start, with a pair of RBI singles from Murphy and Lucas Duda putting the Mets up 2-0 in the first inning. Once again that score stayed put until the fourth inning, but this time around it was the Mets who scored courtesy of a Duda homerun, taking a 3-0 lead. The Cardinals did eventually get on the scoreboard with a homer in the top of the sixth, but Wright answered with his own solo shot in the bottom of the inning. Byrd rounded things out with a blast in the seventh which made it 5-1, and that’s where the score remained as Dillon Gee improved to 5-6 on the season.

St. Louis struck first in Thursday’s rubber game when Matt Carpenter mustered an RBI triple off Matt Harvey in the third. The score remained 1-0 in the Cardinals’ favor until Harvey was substituted to begin the eighth inning and LaTroy Hawkins gave up an RBI single. Byrd attempted to start a rally in the ninth inning with a 1-out solo homerun, but the Mets could not capitalize and lost 2-1. Adam Wainwright became the first pitcher to collect 10 wins this season, and Harvey was dealt his first loss.

The Mets kicked off a weekend series with the Cubs last night, and Shaun Marcum was hit early and often. A homer in the top of the first put the Mets down 1-0, but the real damage was done in the second inning. After allowing two singles and walking the bases loaded, an RBI single drove in another run before Marcum could earn a single out. He struck out the next batter, but David DeJesus cleared the basis with a triple to put the Mets down 5-0.

Daniel Murphy put New York on the board with an RBI single in the bottom of the third; unfortunately the team would not score again until he gave a report performance in the seventh inning. Lucas Duda followed suit, however it was too little too late. The Mets went down 6-3 and Marcum, who is still winless on the year, notched his 8th loss.

Jeremy Hefner is slotted to take the mound for the series’ middle game, which begins at 1:10 PM this afternoon. The series will finish at the same time tomorrow.