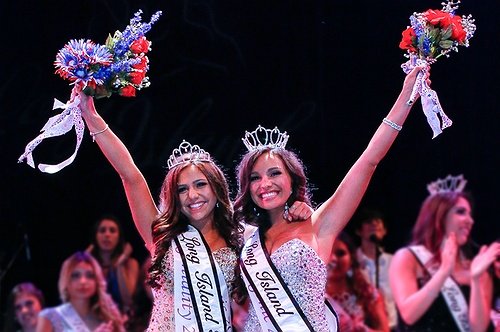 Patchogue, NY - June 9, 2015 - Long Island's most beautiful, intelligent and accomplished young women will come together to compete for the coveted titles of Miss Long Island® and Miss Long Island Teen 2016, presented by Long Island Pageants, at Patchogue Theatre for the Performing Arts (PTPA) on Sunday, July 12, at 3:00 p.m.

Co-emceed by Long Island Pageant directors Jessi Ricco and Sabrina Mastrangelo, the live pageant competition will star the reining queens, Jenna Tirado and Danielle Harloff, and the reigning Miss New York Teen USA® 2015, Geena Cardalena. For the second year in a row, the contestants and queens will be accompanied by the night's featured house band and local Long Island performers, Pursuing JC. The event will culminate with the crowning of Long Island's next royalty - Miss Long Island® and Miss Long Island Teen 2016.

Since 2008, the Miss Long Island® Pageant has brought together many of the region's most beautiful and influential young leaders. They act as positive role models for our nation's youth and are dedicated to a myriad of community endeavors across the Island. Each year, the live competition honors two individuals who will bestow the honor of being crowned Miss Long Island® and Miss Long Island Teen for a year-long reign. During their reign, the Queens will continue their commitment to making a positive impact on the lives of Long Islanders and the community.

Miss Long Island® has truly become one of the most anticipated annual events held each summer. For the seventh year in a row, Patchogue Theatre for the Performing Arts will serve as the venue for the pageant. Drawing hundreds of residents to Downtown Patchogue for the day, the live competition brings a financial surge for many local businesses. Contestants come from Montauk to Floral Park to discover all that Downtown Patchogue has to offer.

With its dedication to promoting everything Long Island, Miss Long Island® continues to showcase local entertainers during the show. Past special guests have included Johnny Sax, who wowed the crowd with his one-man show on saxophone, rising Long Island superstar Kayla Stockert, local actor and singer Stan Kubica II, and even vocal performances from several former Long Island Queens, including Samantha Forde, Lauren Doherty, Sabrina Franza and Michelle Medoff. This year's special guest, Pursuing JC, returns after mesmerizing the crowd at last year's pageant. The local band, comprised of kids ages 12 to 18 years old, will entertain the audience by providing music throughout the live competition.

About The Patchogue Theatre For The Performing Arts (PTPA)
Patchogue Theatre first opened in 1923 as the largest theatre in Suffolk County. It still is, with almost 1,200 seats. Saved by Village of Patchogue in 1996 and lovingly restored it to its original grandeur, this beautiful facility was in use 195 days with over 140,000 in attendance in our 2013-2014 season. PTPA is an independent not-for-profit organization that leases the building from The Village of Patchogue and covers all of the operating costs without any subsidies from the Village. Our leadership is a volunteer board of directors with a professional staff and we are thriving thanks to hard work by dozens of volunteers, companies, funding agencies and individuals who support what we do by contributing their time or their money. Patchogue Theatre for the Performing Arts is located at 71 E. Main St., Patchogue, N.Y., and can be reached at 631-207-1313 or by clicking here.