Suffolk County Police Marine Bureau officers rescued three people from the water after they jumped off their boat that caught fire in the Great South Bay tonight. 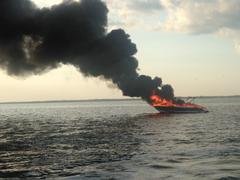 Matthew Biagi was operating a 2001 25 foot Chris Craft with two passengers on a trip from Oakdale to Fire Island when they noticed smoke coming from their engine compartment. They attempted to put out the flames with a fire extinguisher but the extinguisher did not work. The three men put on personal flotation devices, jumped overboard and called 911 from a cell phone at approximately 6:55 p.m. The water was approximately 60 degrees.

The fire was extinguished by fire boats from the Blue Point and Bayport Fire Departments.

The vessel was transported to Timber Point for examination by the Arson Squad.