Madison Mentz, a fifth-grade student at William Floyd Elementary School and captain of the school’s Safety Patrol, has been named the 2014 “Patroller of the Year” by the AAA Safety Patrol of New York State. 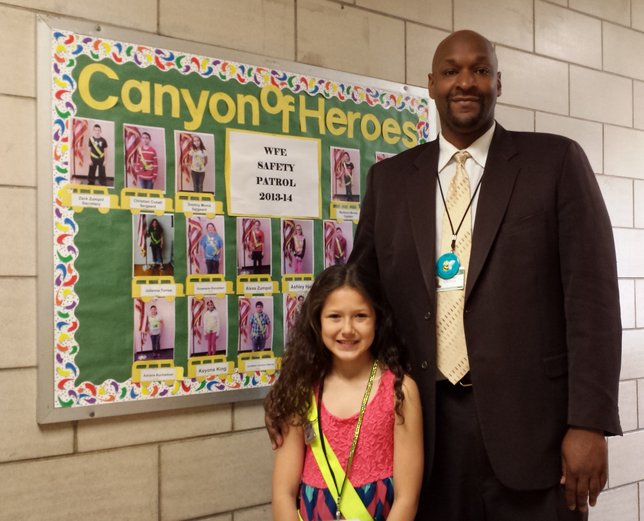 Shirley, NY - June 2, 2014 - Madison Mentz, a fifth-grade student at William Floyd Elementary School and captain of the school’s Safety Patrol, has been named the 2014 “Patroller of the Year” by the AAA Safety Patrol of New York State. Madison was selected based upon her leadership qualities, safety skills, school involvement, citizenship/volunteerism and her essay “How participating in AAA School Safety Patrol helped me become a better leader.” She is the only “Patroller” selected for this prestigious honor in the AAA New York Club area. AAA plans to honor Madison at a luncheon and will present her with a plaque and a $100 award.

As captain of the Safety Patrol, Madison helps teachers and administrators maintain a safe environment and serves as a role model to her younger peers. Some of her responsibilities include assisting with bus safety, communicating and reviewing emergency procedures with the Safety Patrol advisor and fellow team members, reviewing patrol assignments and ensuring that each member is at his or her designated post. She also sets a great example by always wearing the Safety Patrol uniform and being punctual.

In addition to her outstanding leadership qualities and safety skills, Madison has been highly involved in extracurricular activities at school including the technology club, the student council, the garden club, the elementary school band, chorus and the art club; she also has won both the student of the month and citizen of the month award several times. In the community, she volunteers and collects donations for various food, clothing and toy drives, participates in community clean-ups, is involved in peer mentoring for the YMCA’s Aspiring Young Leaders program and serves as a member of the Junior Instructor Leadership Program for the American Taekwondo Association.

“Madison’s intellect, leadership and concern for her fellow students is extraordinary,” said Darryl Wilson, William Floyd Elementary School assistant principal and Safety Patrol advisor who nominated her for this honor. “She works cooperatively and productively with students, parents and the community at large through her volunteer work with student government, our parent teacher organization and her charitable efforts. She is quick to offer a positive word of encouragement or brighten your day with a warm smile. She is a model student and an outstanding citizen.”

“Being ‘Patroller of the Year’ is truly an honor, and we are very proud of Madison and William Floyd Elementary School for being part of AAA’s School Safety Patrol,” said Gerri DiSalvo, Traffic Safety Program Coordinator for AAA New York. “Madison has extraordinary leadership qualities and has directed her efforts in a positive manner, as indicated by the impressive examples and essay submitted in her nomination package.”

In her essay, Madison wrote that Safety Patrol taught her discipline and helped her work hard and as a team. “Every day is a journey for me and I learn something from all the students in this building,” she wrote. “If you’re doing your job, great, but you can always do it better. Discipline and listening are important skills in life.” She noted that she learned much from being a member of the YMCA Leadership Club and Taekwondo, but added that “being a School Safety Patrol captain makes me a role model to students so it’s important for me to make good choices. Making good choices takes discipline!”