Supervisor Lupinacci: "It is our sacred duty to honor those who defend the great United States of America." 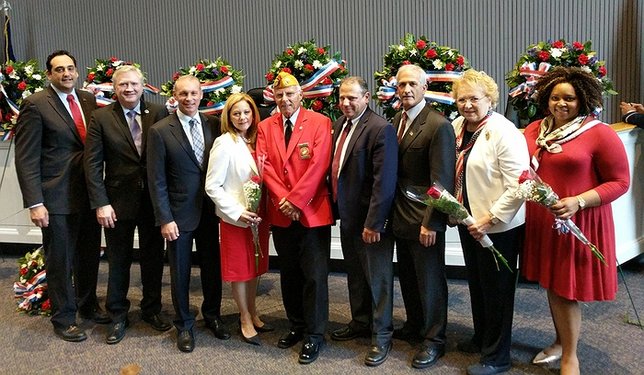 Huntington, NY - May 30, 2018 - On Sunday May 27, The Town of Huntington held its Memorial Day Wreath Ceremony at Town Hall. Town, County and State Officials were joined by service men and women, veterans, community leaders, and a large number of residents in the Board Meeting Room attending the service, held indoors due to rain.
Supervisor Chad A. Lupinacci spoke about the importance of remembering the service men and women who died answering our nation’s call, “to honor the memory of the brave sacrifice our service men and women made, we gather here today and say, thank you. We remember you. We are grateful to you.”
“It is our sacred duty to honor those who defend the great United States of America. Today and always, we must stand united in supporting our nation and the Constitution that guarantees our freedoms. Our fallen heroes deserve no less,” said Supervisor Lupinacci. “Thank a veteran today as we honor his or her fallen comrades. Remember our Gold Star Mothers, whose son or daughter made the ultimate sacrifice. Above all, never take our freedoms for granted.”
“On Memorial Day, we recognize with deep appreciation and solemn reverence those who have made the ultimate sacrifice to preserve all we hold dear. The monuments in our Veterans Plaza contain special notations for those who gave their lives in defense of our country: 39 who died in World War I, 138 in World War II, 10 who were killed in Korea and 49 who perished during the Vietnam War. There are others, not on the monuments because their deaths are more recent. As we solemnly mark this Memorial Day, with ceremonies such as this one and with parades tomorrow, think about all of those who perished in the line of duty. And as we do that, remember the words of that great World War II general, George S. Patton: ‘It is foolish and wrong to mourn the men who died. Rather, we should thank God such men lived.’ Because of them, we are able to be here today,” said Councilwoman Joan Cergol.
County Executive Steve Bellone also addressed the crowd with an emotional tribute to our fallen heroes.
Members of the Church of Saint Patrick’s Youth Choir and Adult Chorale performed patriotic songs throughout the event.
A moment of silence was held to honor members of the New York Air National Guard 106th Rescue Wing who perished in a helicopter crash in Iraq earlier this year, including Master Sgt. Christopher Raguso of Commack.
Wreaths were laid for World War I, World War II, Korean War, Vietnam, and Women’s Veteran Monuments and to honor our troops in the Middle East; Iraq and Afghanistan conflicts.