Huntington resident William Low recognized for his beautiful artwork which is being featured on five of the holiday-themed stamps issued by the postal service this year. 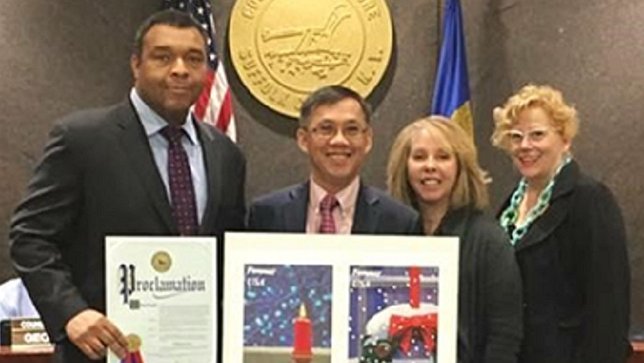 Leg. Spencer presents William Low with a proclamation, along with his wife Peggy, and friend and art colleague, Diana Cherryholmes the coordinator for Suffolk County's Cultural Arts and Film program.

Hauppauge, NY - December 21, 2016 - In the spirit of the holiday season, Legislator William Spencer was delighted to make a special presentation before the Legislature at the December 20th General Meeting, recognizing Huntington resident William Low for his beautiful artwork which is being featured on five of the holiday-themed stamps issued by the postal service this year. 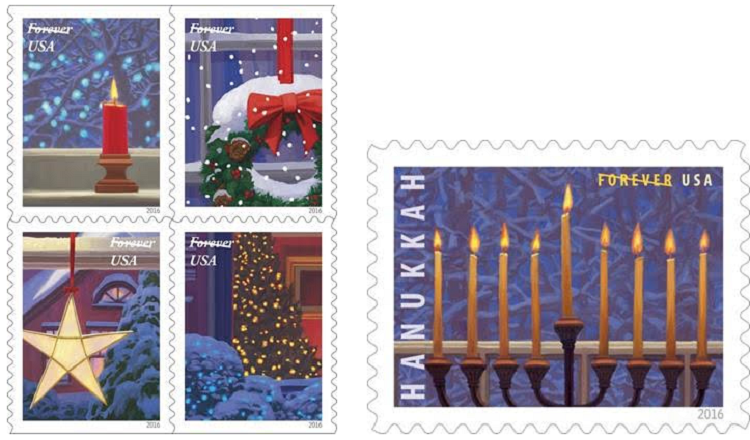 The stamps, which are part of the “Holiday Windows” collection depict winter night scenes for the Christmas and Hanukkah holidays, and will travel on letters and packages to millions of households and businesses throughout the world.

William Low’s art career began as a diversion. As a young person growing up in troubled neighborhood, he and his brother began drawing, starting with imitating figures from comic books. As a teen, William was accepted into the High School for Art and Design in Manhattan and contemplated becoming an architect. However, while there, he picked up a paintbrush and started illustrating scenes of his native borough the Bronx. He secured a full scholarship to the Parsons School of Design and received his first big break with the New York Daily News drawing a series of paintings for their “A New Day for the Bronx” piece in 1982.

Since then, he has continued to build a successful career as a commercial illustrator and painter and has won numerous awards including four Silver medals from the Society of Illustrators. In the past, he was commissioned to paint a nighttime subway map for the MTA, has illustrated and authored several books, and his work has been featured in numerous publications. In 2014, he created his first USPS stamp in the “Winter Flowers” Collection. William is currently the principal in Cobalt Illustration Studios, a full service studio that provides content for children’s books and ad agencies, gallery paintings and fine art quality prints. In addition, he is a professor at the Fashion Institute of Technology in New York City.