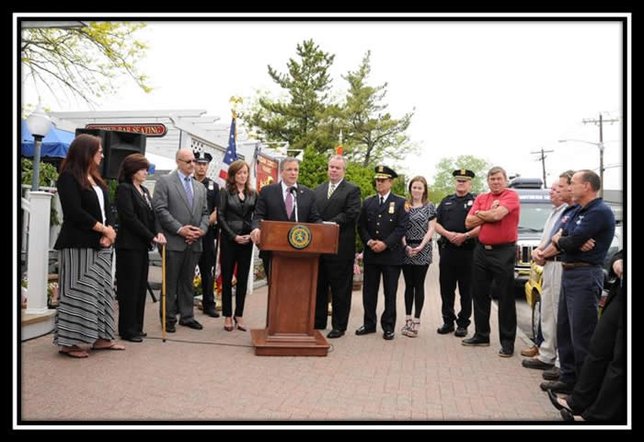 Nassau County, NY - May 23, 2014 - Nassau County Executive Edward P. Mangano and District Attorney Kathleen Rice announced a new and aggressive Stop-DWI initiative known as DWI Alcohol-Related Incident Team (DART) - that reestablishes the Selective Enforcement Team (SET) while also utilizing the Intelligence-Led Policing models that have proven to be successful in reducing crime to stop even more drunk drivers and alcohol-related crimes. Based on significant analysis, the Police Department has identified “hot spots” that have a propensity for DWI-related crime and will enhance SET by adding 3,000 patrols that focus on these identified hot spots thanks to $1 million in Asset Forfeiture funds provided by District Attorney Rice and the Police Department.
“Drunk drivers jeopardize the lives and safety of innocent people every time they get behind the wheel,” said County Executive Mangano. “Nassau County’s new DWI Alcohol-Related Incident Team (DART), together with the reestablished Selective Enforcement Team (SET), will be targeting drunk drivers – not just this Memorial Day weekend but all year round - looking to prevent senseless alcohol-related accidents and locking up those who break the law. There will be 3,000 additional police patrols throughout Nassau County looking for drunk and impaired drivers. Think before you drink. Don’t drink and drive.”
On Thursday, May 15th, DART began operations and made 20 arrests for DWI by the end of its first weekend. Additionally, as part of DART, the Police Department conducted 3 sobriety checkpoints last weekend where approximately 1,000 cars were screened and 6 subjects were arrested for DWI. Checkpoints – including use of the BATMobile (Breath Alcohol Testing Mobile) - will continue under DART along with the Department’s Project 21 initiative which aggressively targets licensed premises that serve underage and intoxicated persons. The Police Department visited 120 licensed premises last weekend and reported 114 to the New York State Liquor Authority. Furthermore, the Department is scheduling a summit with local school districts and universities to increase education and awareness among students. In addition, the Department will be expanding the Drug Recognition Expert (DRE) program, and all new Police Officers will receive additional DWI enforcement training in the Police Academy. Furthermore, the Department will acquire an additional number of Preliminary Breath Testers (PBTs) in the near future.
District Attorney Kathleen Rice stated, “To see one life lost to a drunk or drugged driver is one too many. This new initiative will save lives and help keep our roads safer as we approach the summer months and I thank the County Executive and Police Commissioner for their renewed efforts and support. I also thank passionate citizen groups like MADD, RADD and DEDICATEDD for their advocacy and support.”
Acting Police Commissioner Tom Krumpter added, “A review of statistics indicate that aggressive past enforcement policies, combined with education and awareness campaigns, have reduced the number of intoxicated drivers on Nassau County roadways. To ensure this is the case, the Police Department is partnering with the District Attorney to launch an even higher level of DWI enforcement. While DWI fatalities are at historic lows - down 40% since 2011 - and the average Blood Alcohol Content (BAC) of DWI arrests are among the lowest in the state, the department can always and will always do better to make our roadways safe.”
The County Executive and District Attorney were joined at the press conference in Barnum Island by Rich Mallow, State Executive Director of Mothers Against Drunk Driving (MADD); Steve and Michael Jordan, owners of Jordan Lobster Farms in Barnum Island; John Vitale, owner of Bridgeview Yacht Club; Marge Lee, President of DEDICATEDD; Marianne Blessinger, owner of All Island Transportation; and officials from the Nassau County Police Department and Nassau County Office of Traffic Safety. Participants reminded residents: