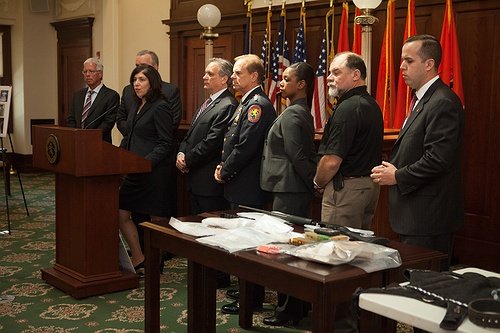 “Too many young people have fallen victim to heroin and opioid addiction,” said County Executive Mangano. “I commend all those in law enforcement for helping to take down these drug dealers and remove deadly narcotics from our neighborhoods. Enforcement, combined with my administration’s comprehensive strategy of education, awareness, Narcan and treatment, is helping combat this nationwide crisis. In addition, I would like to thank our officers for helping put a stop to the dog fighting operations and ending the abuse that was being inflicted on the animals involved. Dog fighting is a heinous and barbaric crime that will not be tolerated.”

“Today we are announcing further action to stop gangs and the flood of heroin and other opiates that have destroyed the lives of children and families across our region,” Acting DA Singas said. “With investigations like these, we are taking down pushers of violence, addiction and death who have been preying on our communities, while further demonstrating the clear and undeniable link between animal abuse and broader criminal enterprises. After having spent my entire career as a prosecutor advocating for victims, and as a mother of two teenagers myself, I will never let up in the fight to protect families from heroin and gangs."

“Make no mistake; those arrested in this operation represent some of the worst of society - they deal in death and the destruction of lives. The Nassau County Police Department continues to work closely with our partners in law enforcement and will leave no stone unturned as we rid our communities of this scourge,” added Police Commissioner Tom Krumpter.

In late March 2015, County Executive Mangano issued a Deadly Drug Alert to warn the public of narcotic fentanyl reemerging in the State of New York and Nassau County. Fentanyl is a synthetic narcotic painkiller of extremely high potency. The drug is approximately 50 to 100 times more potent than morphine, which is the active ingredient in heroin. Fentanyl is clinically used for the treatment of severe pain or the induction of anesthesia. Severe respiratory depression may occur with the use of fentanyl.

The Major Case Bureau, Narcotics Vice Squad, in conjunction with the Nassau County District Attorney’s Office Street Narcotics Gang Unit, initiated an extensive investigation into fentanyl-laced heroin in Nassau County. During this investigation it was determined that a number of subjects may have engaged in dog fighting operations, including the fighting, breeding and training of pit bulls.

On Wednesday, May 13th, the Major Case Detectives, Bureau of Special Operations, the District Attorney’s Squad and Investigators, Emergency Services Unit and The American Society for the Prevention of Cruelty to Animals executed search warrants in the Roosevelt area and the Incorporated Village of Freeport which resulted in these arrests.