$5 Million in Street-Ready Heroin Seized in the Bronx: Nearly Half a Million Packages and Raw Heroin Recovered

Two members of a major drug trafficking operation in the West Bronx section of the Bronx were arrested. 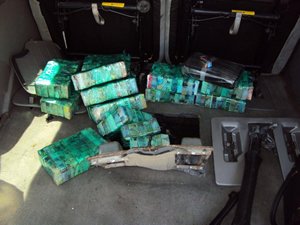 New York, NY - June 19, 2014 - Bridget G. Brennan, New York City’s Special Narcotics Prosecutor, James J. Hunt, Acting Special Agent in Charge of the U.S. Drug Enforcement Administration’s New York Division (DEA), New York City Police Commissioner William J. Bratton and Joseph A. D’amico, Superintendent of the New York State Police, announced the arrests of two members of a major drug trafficking operation in the West Bronx section of the Bronx. Approximately 475,000 glassine envelopes of heroin weighing approximately 20 kilograms (44 lbs.) were seized from inside a vehicle.
Agents and officers with the New York Drug Enforcement Task Force (DETF), Group T-42, arrested Rosa Vasquez and Carmen Garcia at approximately 11 a.m. on Wednesday. Group T-42 is comprised of agents, officers and investigators from the DEA, the New York City Police Department (NYPD) and the New York State Police. The case is being prosecuted by the Office of the Special Narcotics Prosecutor.
As a result of a long-term investigation, agents had set up surveillance at a suspected heroin packaging location in the vicinity of Creston Avenue and 180th Street on Wednesday morning. Agents observed Garcia arrive at the location in a Honda Accord. Garcia exited the Honda and entered a parked Chevrolet Venture van. Subsequently, Vasquez approached the van with a large black duffle bag. Vasquez entered the rear passenger seat of the van.
For approximately 10 minutes, agents followed as Garcia drove the van in an erratic manner. During this time, agents observed Vasquez in the back seat motioning towards the cargo area.
Garcia pulled the van into a parking garage at 1752 Morris Avenue in the Bronx, at which point the two women exited the van and began to walk away. Agents stopped the pair and approached the van, recovering car keys still in the ignition.
Inside the duffle bag were four shrink-wrapped bricks, with each brick containing approximately 25,000 street-ready glassine envelopes of heroin. In a hidden compartment in the cargo area of the van, agents found 15 additional shrink-wrapped bricks and one large kilogram (2.2 lbs.) of raw heroin.
Each of the 19 bricks of heroin contained approximately 25,000 glassine envelopes, for a total of 475,000 glassines with a street value of $4,750,000. The uncut kilogram of heroin would have sold for at least $250,000 once it was processed and packaged for retail distribution.
More than $5,000 in cash was seized from the home the women share at 1055 Boston Road, Apt. 2A.
The defendants are expected to be arraigned this afternoon in Manhattan Criminal Court.
The charges and allegations are merely accusations and the defendants are presumed innocent until proven guilty.