Honors included a clean sweep of the top three in the environmental division. 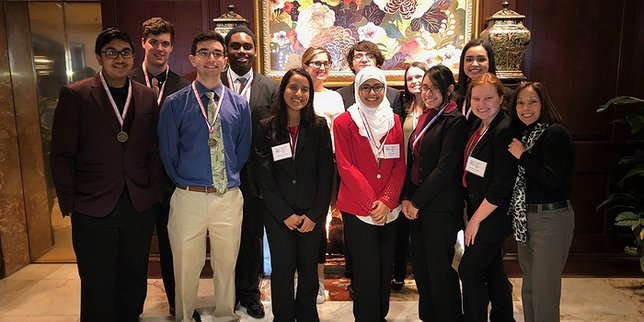 Mastic Beach, NY - May 2, 2018 - Several William Floyd High School student-scientists recently took home a host of awards including a clean sweep of the top three in the environmental division of the Junior Varsity Long Island Science and Engineering Fair.
Placing first were Jason Rattansingh and Dominick Caputo for their project, “An Analysis of Soil Microhabitats in Revolutionary War, Civil War, and Modern Graveyards on Long Island.” For this project, the students collected samples from cemeteries containing bodies that were exposed to different embalming techniques. The students determined that there were trends based on location and bacteria appeared to be in competition with one another. Additionally, bacteroidetes, a phyla associated with arsenic metabolism, were in higher concentrations within the civil war cemetery. This finding is significant as arsenic was the main component in embalming techniques during the Civil War. It is important to note that this is an inference and there could have been other factors contributing to this variation.
Nathalia Reis and Erin Tumbrello tied with Asma Asghar and Farihah Chowdhury for second place.
Asma Asghar and Farihah Chowdhury’s project, “The Effect of the Environment on the Microbiota of Amblyomma americanum,” saw students analyzing the microbes within lone star ticks from three different regions and comparing the ancestral lineage of pathogens present within the ticks. They found that there were variations present based on location and that some of the pathogens present that were more closely related to one another exhibited similar symptoms if contracted. It is important to note that just because pathogens are present within these ticks, microbiome research only reveals what is present and not what can be transmitted.
Also placing second in this competition was the team of Nathalia Reis and Erin Tumbrello for their project, “Using DNA Barcoding to Analyze the Biodiversity of Biological Vectors in Locations with Varying Levels of Habitat Complexity.” For this project, students analyzed the biodiversity of vectors from a forested and a coastal region. The forested region contained higher biodiversity of vectors which students believe is due to increased habitat complexity, or a third dimensional canopy for organisms to hide/live in.
Taking home third place was the team of Elizabeth Scianno, Philip Oriuwa and Angela Ochoa for their project, “Analyzing the Microhabitats of Zostera marina.” In this project, students conducted two rounds of analyses on different parts of Zostera marina (a local eelgrass): sediments, roots and leaf blades of Zostera. The first round of analyses allowed them to see that there appears to be no relationship between which microbes are present and how dense the patches were. This led to the discovery of stramenopiles, an order of bacteria that contains a species associated with eelgrass wasting disease. Students then looked at “healthy” and “unhealthy” zostera samples and compared their microbial content.
Taking home the Honorable Mention award was the team of Christian Meehan and Kyle LaSpisa. Their project, “Analyzing the Biodiversity of Predatory Arachnids and Insects in Forested and Riverine Regions,” focused on the analyzation of the biodiversity of arachnids from a forested and a riverine region. The riverine region contained similar but slightly higher biodiversity which students believe is due to energy influx from the aquatic and terrestrial food web interaction.