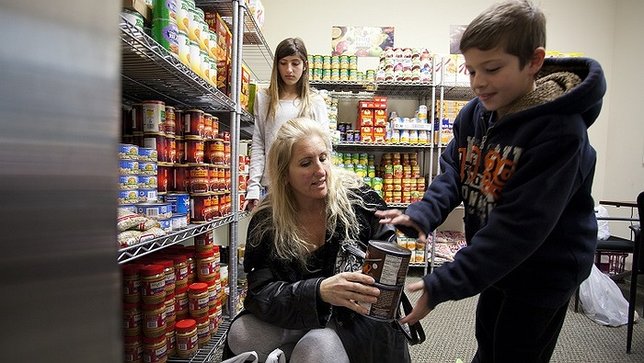 Bethpage, NY - December 19, 2016 - Island Harvest Food Bank has recently received a $200,000 grant award from Capital One that will support approximately 328,000 meals to help the region’s most vulnerable populations faced with the daily struggle of not having enough food to eat.

More than 316,000 Long Islanders, or one-in-ten, are faced with food insecurity according to Island Harvest Food Bank and Feeding America, a national hunger-relief organization. Food insecurity is a condition of limited or uncertain access to adequate food. Those identified as food insecure include working families with adults often working two or more jobs, seniors citizens, veterans, and children under the age of 18.

“Capital One’s generous gift and their ongoing support of helping us address the issue of hunger is a shining example of a company that truly cares,” said Randi Shubin Dresner, president and CEO, Island Harvest. “Capital One has established themselves as a valued partner in our fight against hunger and their active participation with us is having a positive impact on our Long Island neighbors who rely on our services each and every day.”

A leader in hunger-relief efforts on Long Island, Island Harvest Food Bank is expected to collect and distribute approximately 10 million pounds of food in 2016 through its network of more than 400 community-based nonprofit agencies. In 2016 its Supplemental Nutrition Assistance Program (SNAP) outreach efforts helped 1,256 families gain approval for SNAP resulting in $4 million in direct benefits, and a local economic multiplier benefit of approximately $7.1  million.

About Island Harvest Food Bank
Island Harvest Food Bank is a leading hunger-relief organization that provides food and other resources to people in need. Always treating those it helps with dignity and respect, its goal is to end hunger and reduce food waste on Long Island through efficient food collection and distribution; enhanced hunger-awareness and nutrition-education programs; job training; and direct services targeted at children, senior citizens, veterans, and others at risk of food insecurity. As a result of Island Harvest Food Bank’s dynamic business model, more than 94 percent of expended resources go directly to programs and services that support over 316,000 Long Islanders facing hunger. Island Harvest Food Bank is a lead agency in the region’s emergency response preparedness for food and product distribution, and is a member of Feeding America®, the nation’s leading domestic hunger-relief organization. Island Harvest is a four-star-rated nonprofit by Charity Navigator, an independent charity watchdog organization. More information can be found at www.islandharvest.org.